Since the launch of Google Pay in the market, it has continuously gained popularity to be one of the most favorite payment applications. It makes online transactions easy and accessible with the security assurance of Google. Despite the popularity surging daily worldwide, you still might not know who accepts google pay in your area. It is safe to know beforehand to avoid future misunderstandings during the transaction process. So, in this article, you will get to know who accepts google pay in your nearby section and how can you pay with Google Pay online. 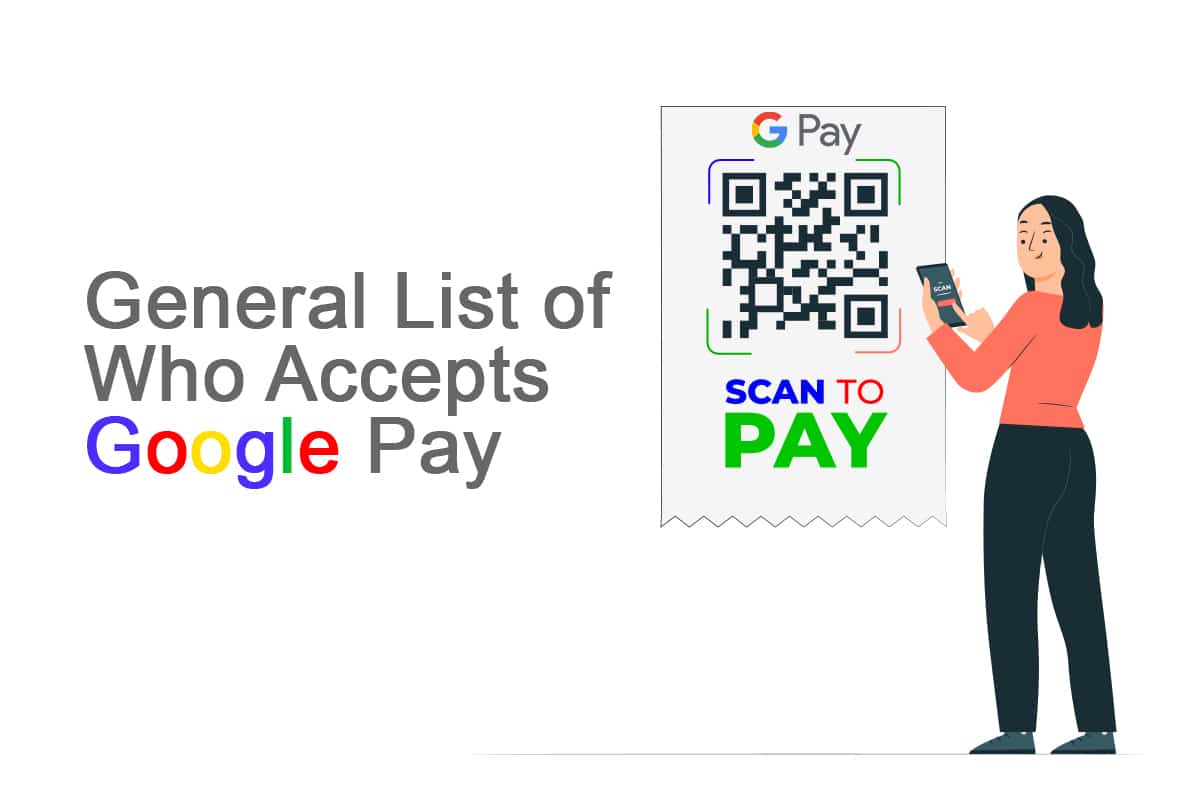 How to Find Who Accepts Google Pay

Google Pay is a digital wallet platform/application and online payment system developed for cashless payments between sender and receiver. Users can download and use the Google Play application on their Android and iOS devices. You can make payments from anywhere and anytime directly through your bank account without worrying and checking the cash balance in your wallet from time to time. However, as said earlier, it is better to know in advance about the places that accept Google Pay as a transaction method.

1. Open the Google Pay application on your phone.

2. Tap on the Profile icon from the top-right corner, as shown below. 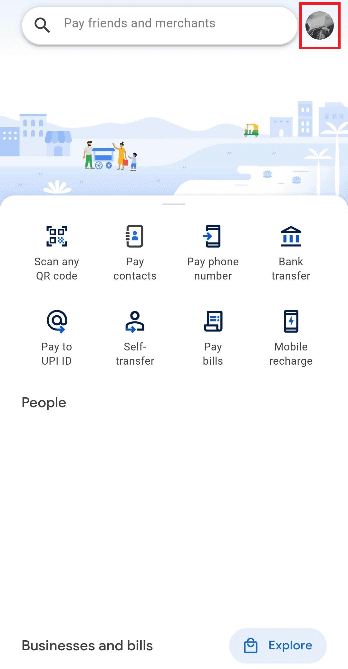 3. Tap on Pay businesses Debit/credit card as shown below. 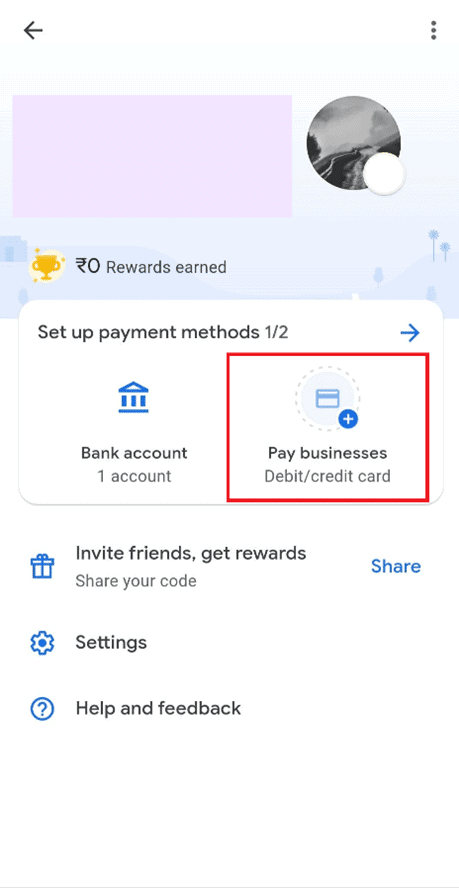 4. A pop-up will appear. Tap Proceed to add the card to your Google Pay account. 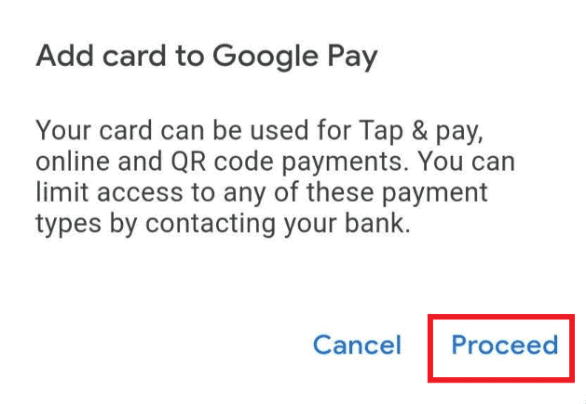 5. After this, you can either click a picture of your credit/debit card or enter the card details manually to add it to your Google Pay account.

6. After adding the card, scroll down and tap on Explore option against Businesses and bills as depicted below.

7. Upon entering, you will see various sections like Trending, Food, Daily Essentials, etc., showing the stores and places near you for that type of business. By this, you will get to know who accepts Google Pay as a transaction method.

National Payments Corporation of India (NPCI) developed Unified Payments Interface (UPI) to facilitate inter-bank peer-to-peer (P2P) and person-to-merchant (P2M) transactions in India regulated by the Reserve Bank of India (RBI). With this, users can transfer funds between two bank accounts from their mobile phone applications. One of the applications supporting UPI is Google Pay which is also supported by several Indian banks.

Some of the popular Indian banks are mentioned below who accepts Google Pay transactions:

Firstly, released in the USA in 2015, Google Pay spread instantly in other countries in the world. Google is still trying to take Google Pay to as many countries as possible. Some of the countries that already have Google Pay as a verified transaction method are:

Also Read: 10 Ways to Fix Google Photos Not Backing Up

How to Pay with Google Pay Online

After knowing where you can use Google Pay for payments, you should also know how to pay with Google Pay online. There are different ways you can utilize the Google Pay application to do cashless payments. Read below to understand those.

One of the most commonly used approaches to making contactless payments is scanning a QR code that the receiver has set. If you are shopping and want to make a quick payment, you might see a QR code on the checkout point of the shop. To use this approach, you have to:

1. Open the Google Pay application on your phone.

2. Tap on the Scan any QR code option on the main screen as shown below. 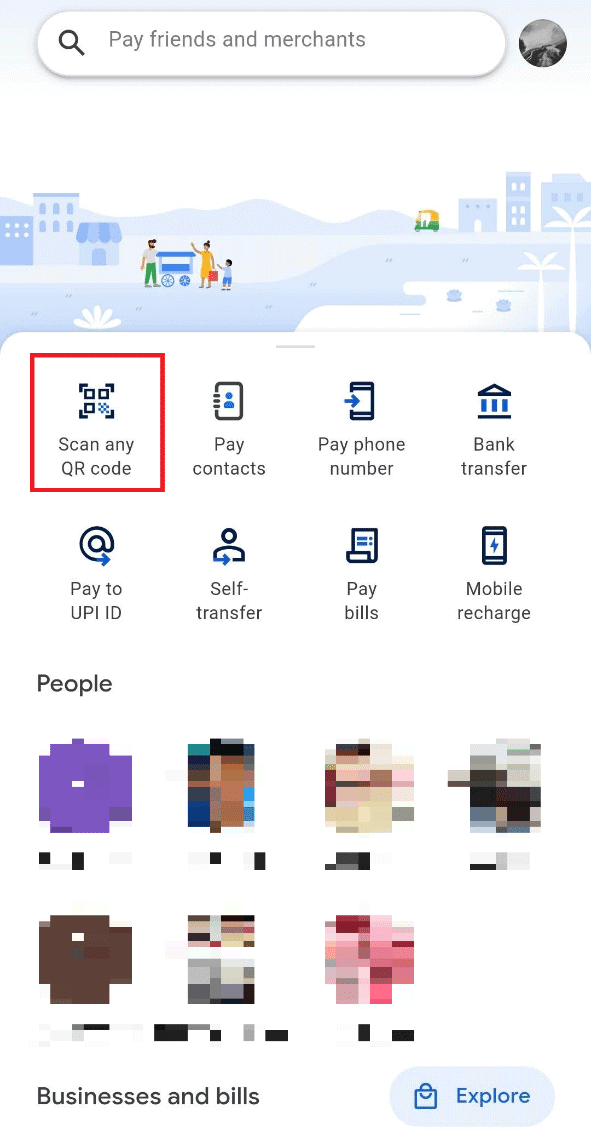 3. The Google Pay QR code scanner will open as depicted below. You can scan any QR code with this to start the payment process. 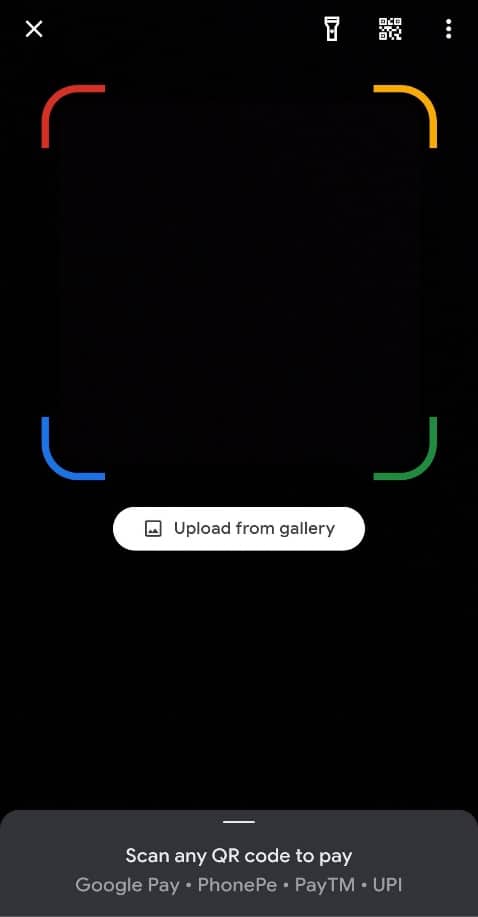 4. After scanning the QR code, you will be redirected to the page where you have to enter the amount, security pin called UPI pin, and tap the Pay option. The payment will be done.

Also Read: How to create a Gmail Account without Phone Number Verification

Now, you know how to find who accepts Google Pay, you have the option to make payments through contacts or phone numbers. For that, both the sender and receiver phone numbers should be registered with Google Pay. You have to select a contact or enter a phone number you wish to pay to and enter the amount and UPI pin to conclude the payment successfully. 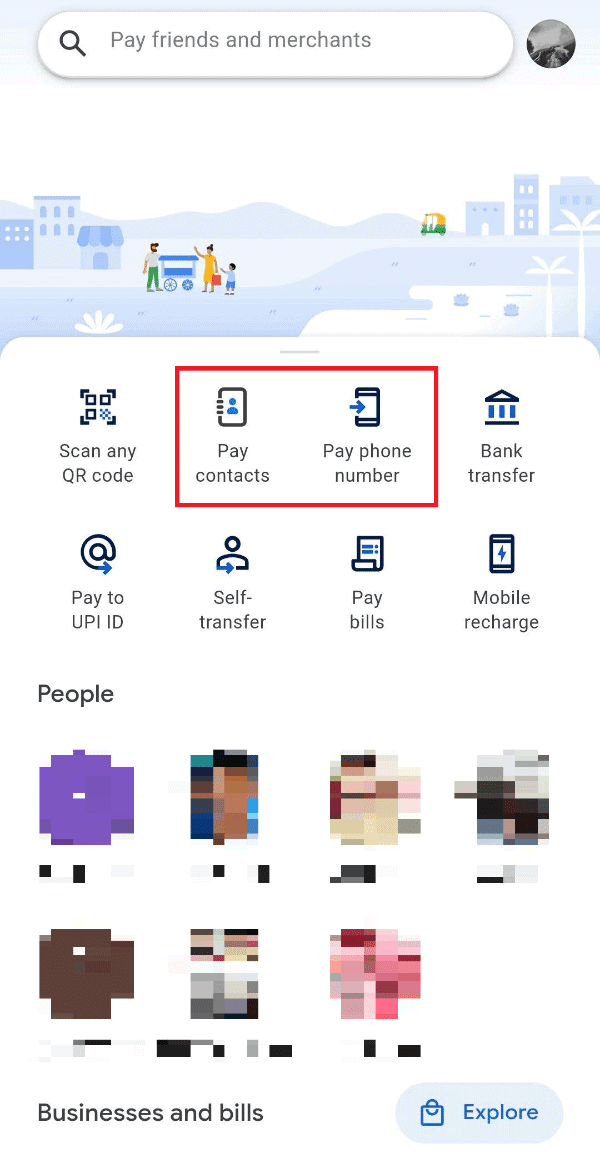 Additionally, Google Pay also provides a feature called Split an expense, where you can form a group to split the expenses evenly with the members of the group. See the steps below to see how it works.

1. Tap on the Pay contacts option shown above in the illustration and select as many contacts as you want to create the group. You can name and edit the group name as well.

2. After creating the group, you will see the Split an expense option at the bottom. Tap it to start the splitting payment process. 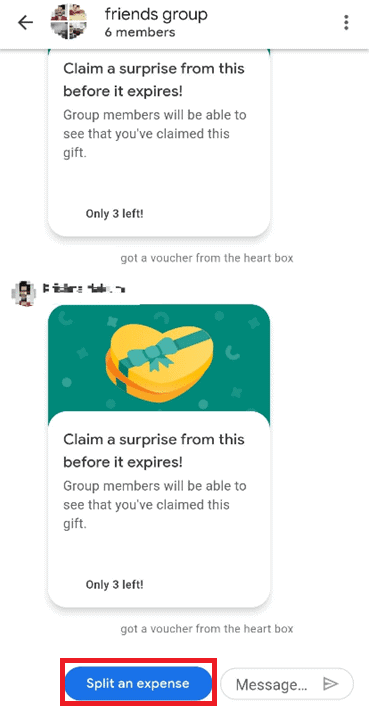 3. Enter the total amount you want to split and tap Next. 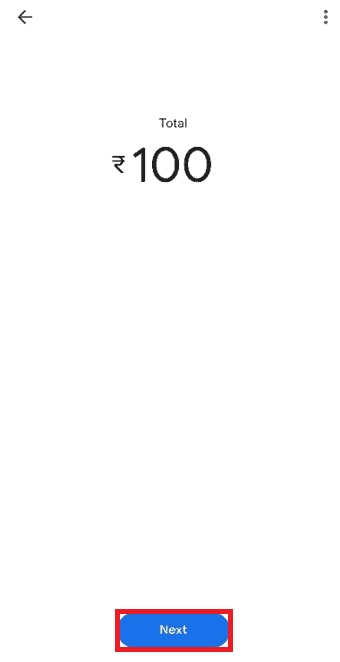 4. On the next screen, you will see the split amount allotted for each group member. Tap the Send request option. 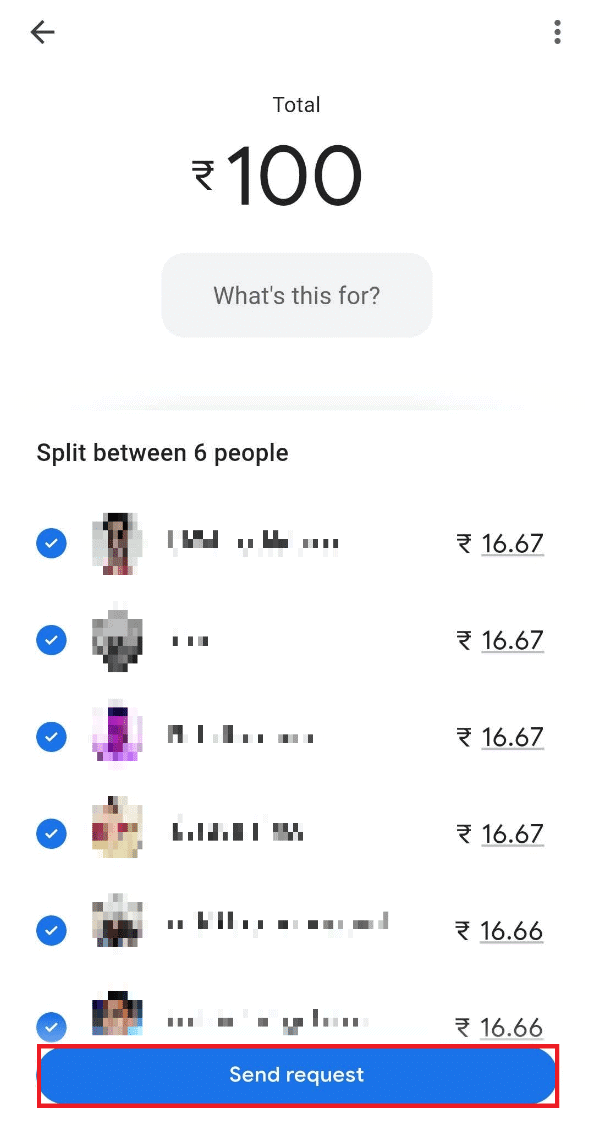 5. Every group member will be notified about the due payment.

Another method to pay with Google Pay online is a bank transfer. Upon clicking the Bank transfer option from the Google Pay main screen, as shown below, you see the recipient details fields. You have to enter your Account number twice, IFSC code, and recipient name. You will also have to enter the UPI pin before paying the funds. 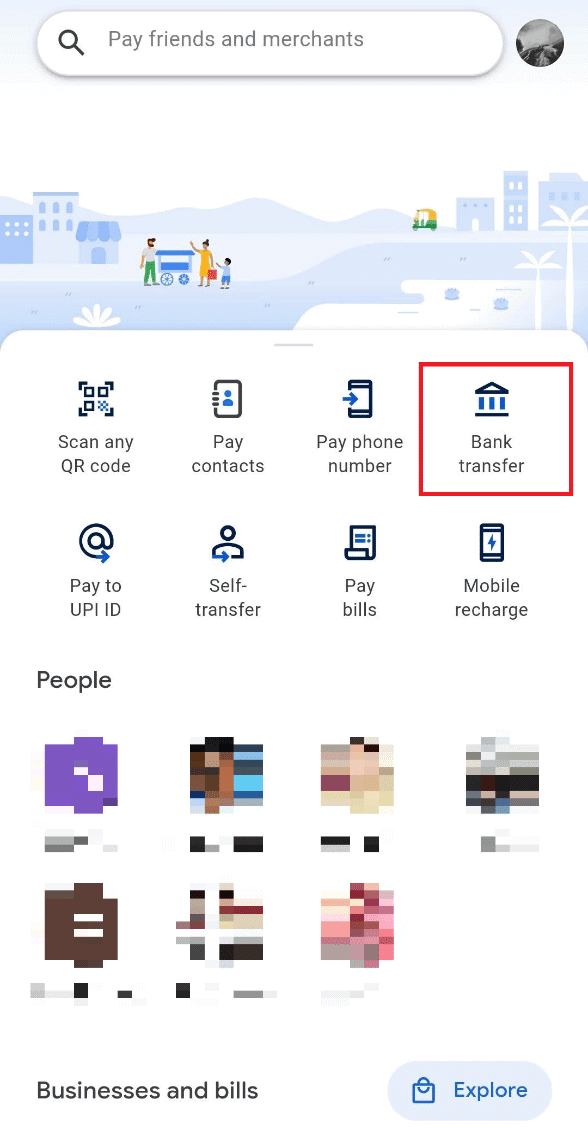 You can also use UPI Id to pay to someone who accepts Google Pay. UPI Id is a virtual payment address for every UPI user that gets created when you set up your Google Pay or any UPI account. UPI id typically contains your name and bank name, in this manner: yourname@bankname. Every Google Pay account has a UPI id which can be used to make payments, similar to QR codes and contacts. UPI id helps the users get identified independently on the UPI network. 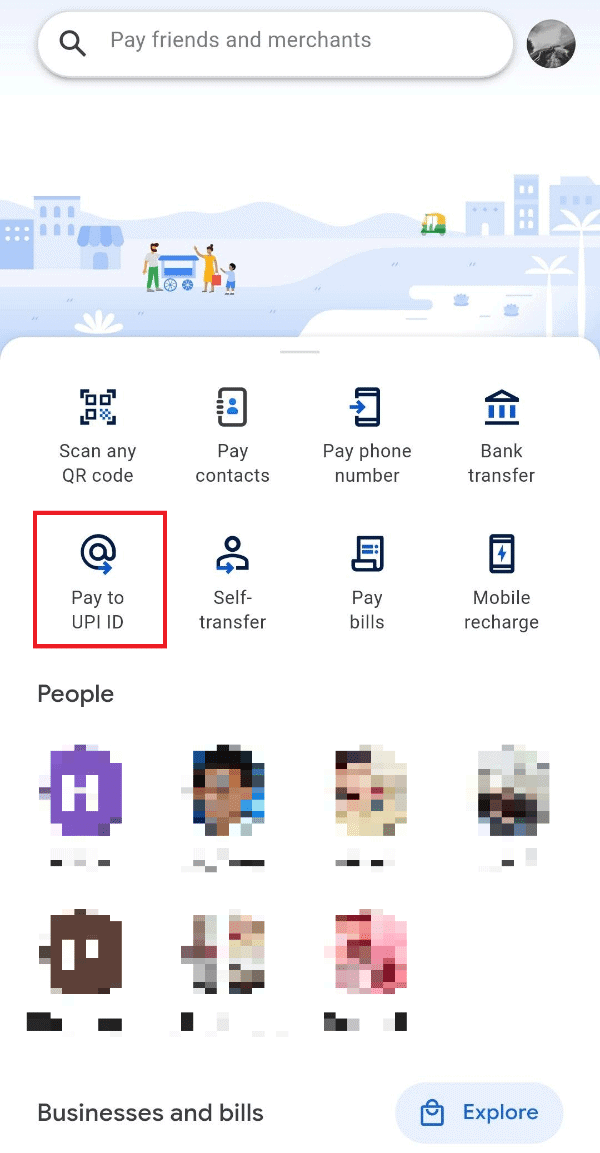 Moreover, you can also recharge your mobile, DTH network, broadband/landline, and pay electricity, gas, and credit card bills with ease. 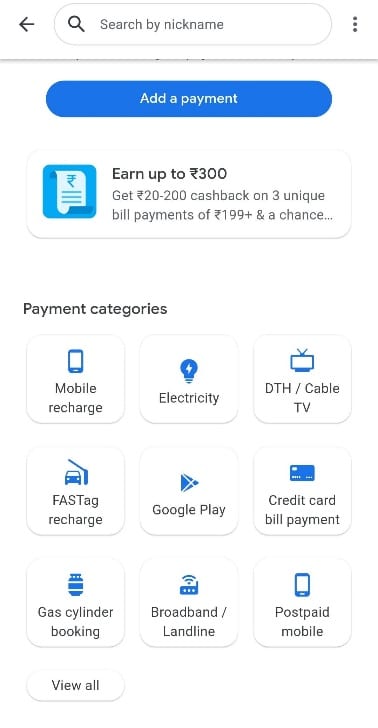 Q2. Will I be able to use Google Pay without a bank account?

Q3. How many members can be added to a group on Google Pay?

So, this was all about Google Pay you wanted to know. You got to know who accepts Google Pay and how to pay with Google Pay online with a bunch of different approaches. Let us know what Google Pay features you like the most and use frequently in the comments section below.