Twitch is a popular live streaming service provided to gamers and creators to stream the gameplays and other activities. Twitch creators can also interact with their fanbase and other Twitch users while sharing their content on the platform. If you are one of the Twitch streamers or users and have this question in your mind: Is Twitch down right now? You are at the right place! Keep reading this article till the end to learn the methods to fix the Twitch app not working issue. 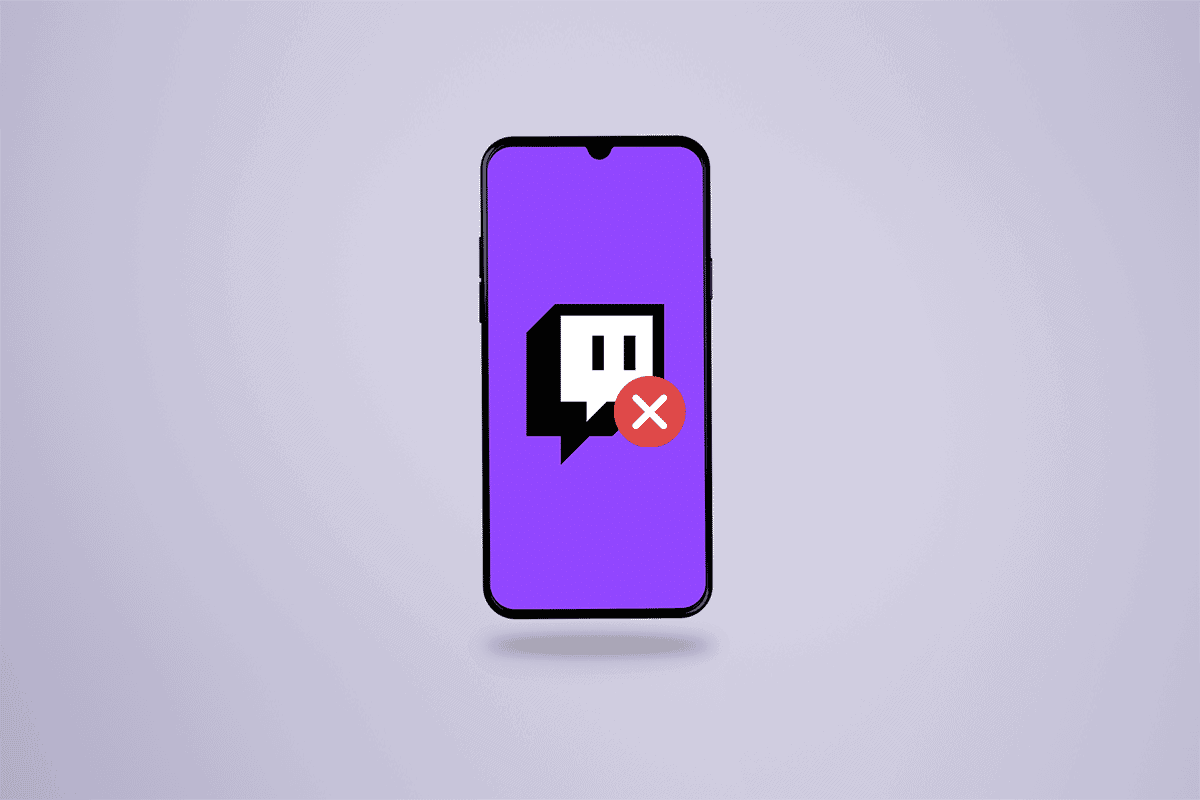 How to Fix Twitch App Not Working on Android

There are several reasons for this issue to occur:

So, let us now take a look at the solutions with which you can fix the Twitch app not working Android issues instantly.

Note: Since smartphones do not have the same Settings options, they vary from manufacturer to manufacturer. Hence, ensure the correct settings before changing any on your device. These steps were performed on MIUI 11, as shown in the illustrations below.

It is one of the essential and workable solutions that can fix the issue you are facing without following any complicated steps.

1. Press the Power button on your phone and tap on the Reboot option, as shown below.

2. Tap on the Reboot option once again if prompted and wait till the phone completes the restart process.

You can visit the Downdetector Twitch page to see if there have been any server disruptions on the Twitch side. If there are several reports about the Twitch app not working due to server issues, the Twitch support team will make an announcement and the issue will get fixed by them as early as possible. This method will certainly answer your is Twitch down right now query. 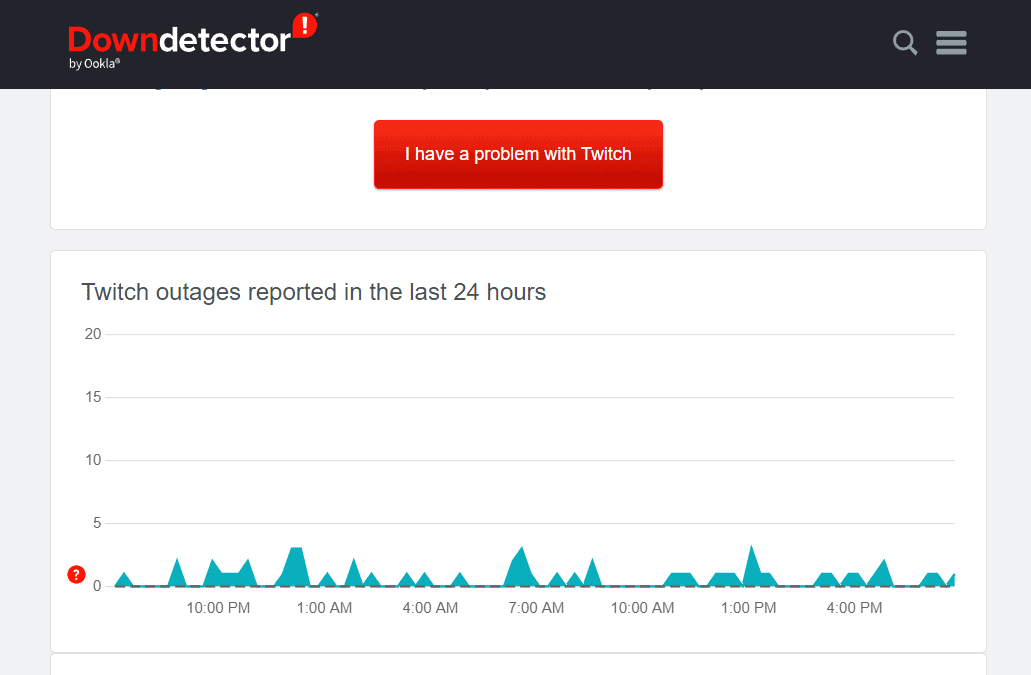 1. Open the Settings app on your phone.

2. Locate and tap on Additional settings, as shown. 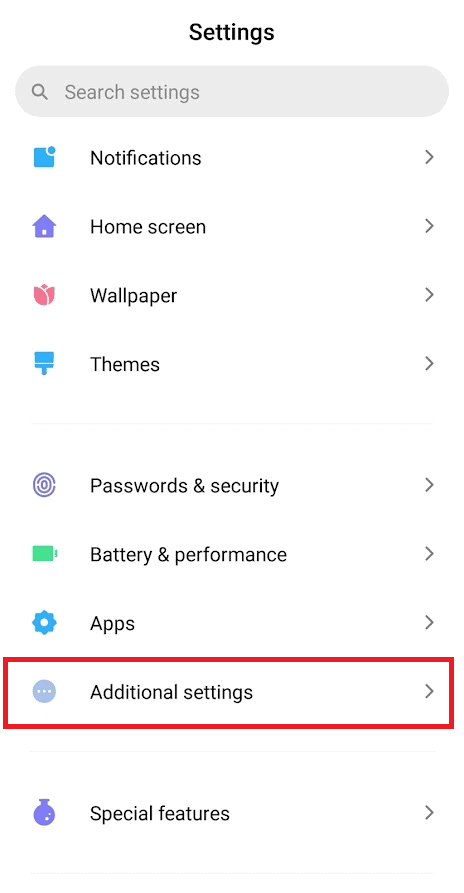 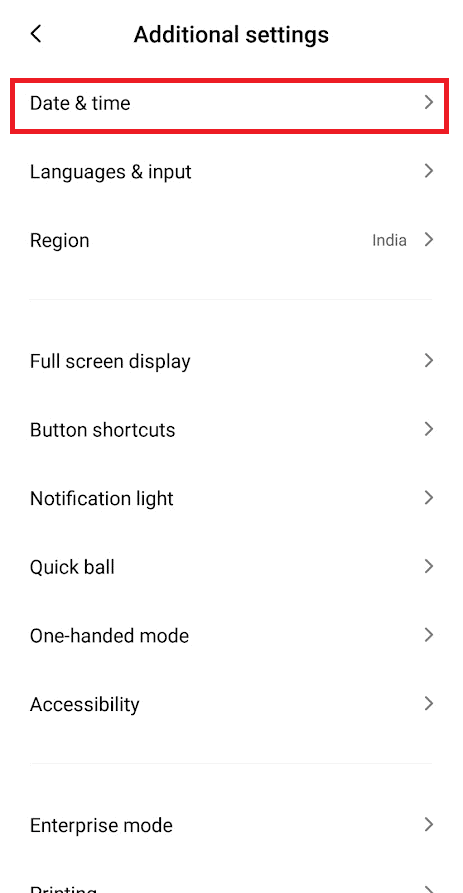 4. Turn on the toggle for Automatic data & time and Automatic time zone, as shown below. 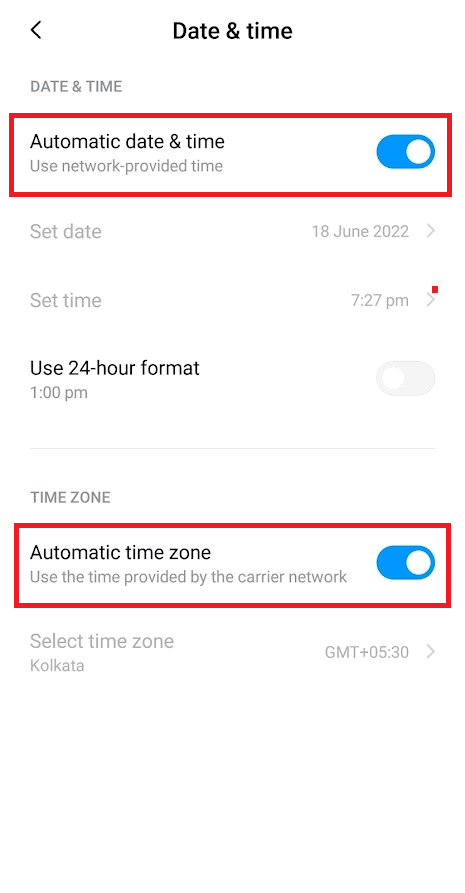 One of the common Twitch bugs causes the Twitch app not working issue when the stream you are watching is set at the automatic video quality. So, you will face lagging and buffering while watching any stream on Twitch in auto video quality mode. To fix this problem, follow the below steps to change the twitch stream quality.

1. Open the Twitch app on your Android phone.

2. Tap on any desired stream from the Discover tab to open it. 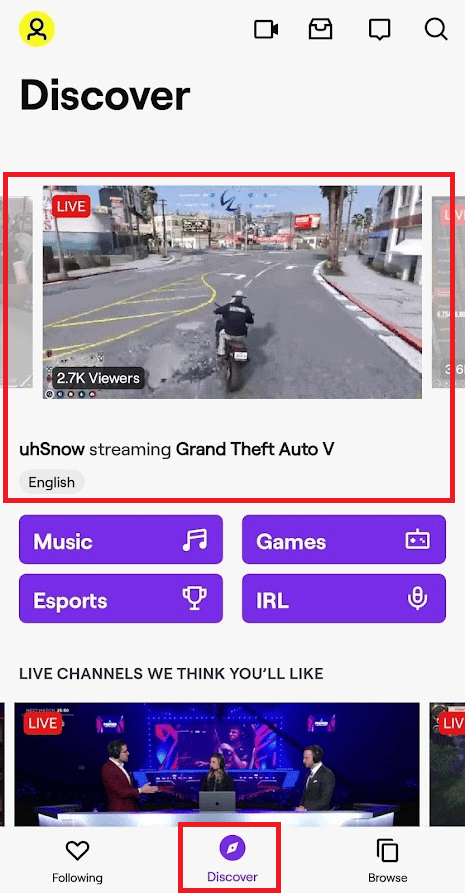 3. Tap on the Settings gear icon from the top right corner, as shown.

4. Tap on any quality option other than Auto under the QUALITY OPTIONS section and tap on Apply, as shown. 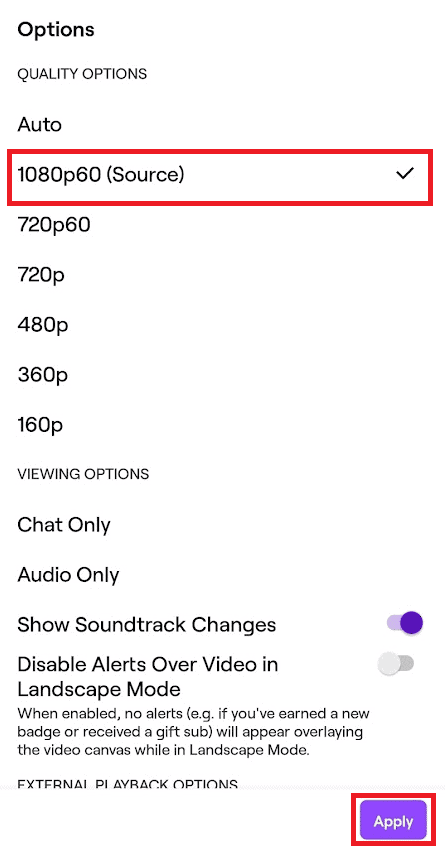 Updating the app itself which is facing all the issues is the best way to fix them in one go. Read and follow the steps below to update your Twitch app. 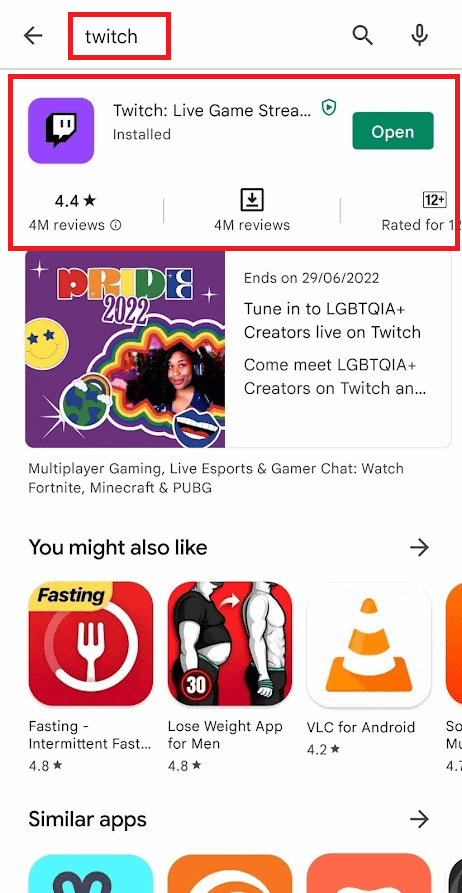 2A. Tap on the Update option to update the Twitch app to the latest version. 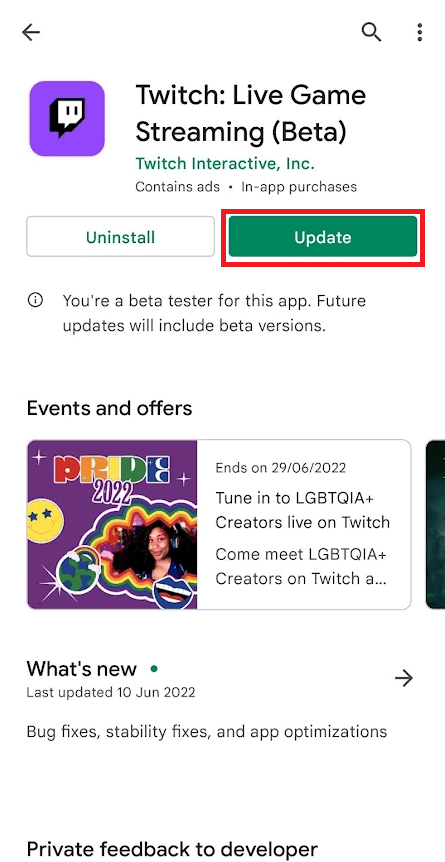 2B. If the app is already updated to the latest version, you will see the Open and Uninstall options. So, carry on with the next methods to fix the desired issue. 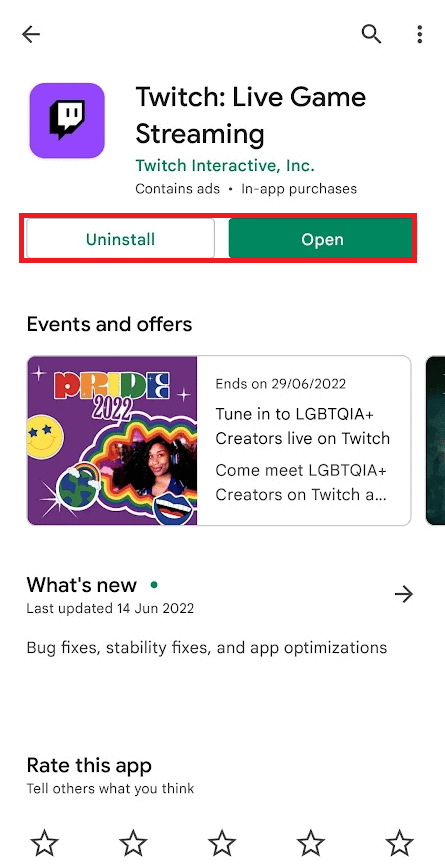 Beta programs are designed to test a few active bugs which cause various issues in the app. If you are part of one such beta program for the Twitch app, you may face the Twitch app not working Android constantly. Perform the following steps on your phone to opt-out of the beta program to eventually fix the issues you are facing.

2. Scroll down and tap on Leave. 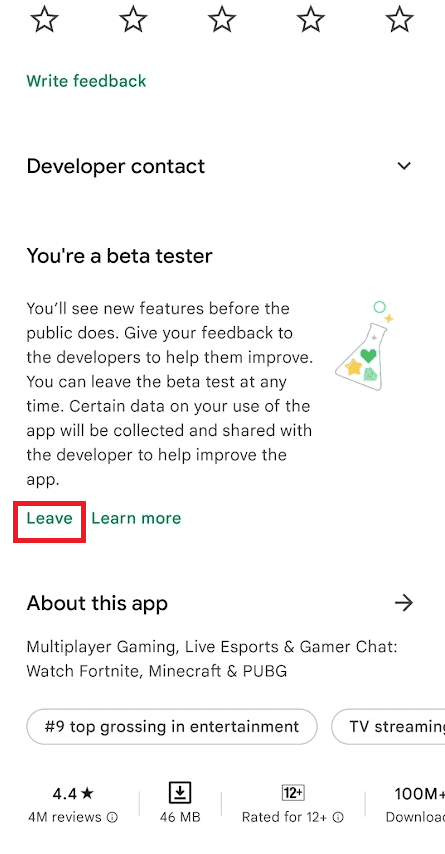 3. Tap on Leave once again for the confirmation popup. 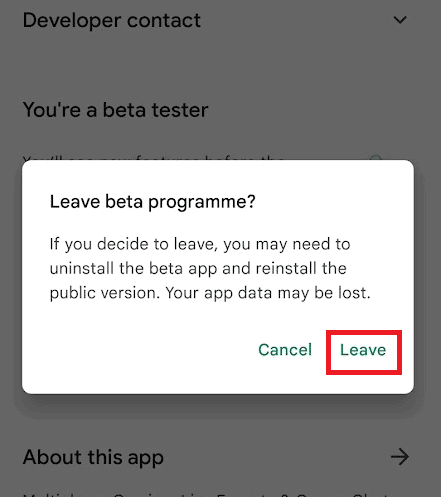 After all the methods, if the issue is still not fixed, clear the cache and data of the Twitch app.

1. Open the Settings app and tap on the Apps option. 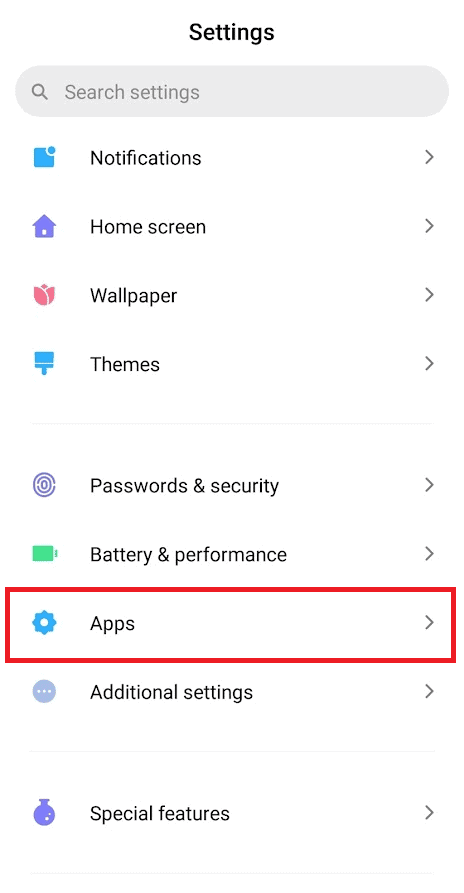 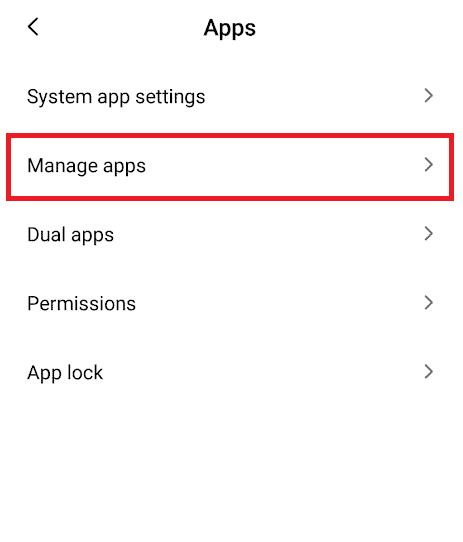 3. Locate and tap on Twitch from the list, as shown. 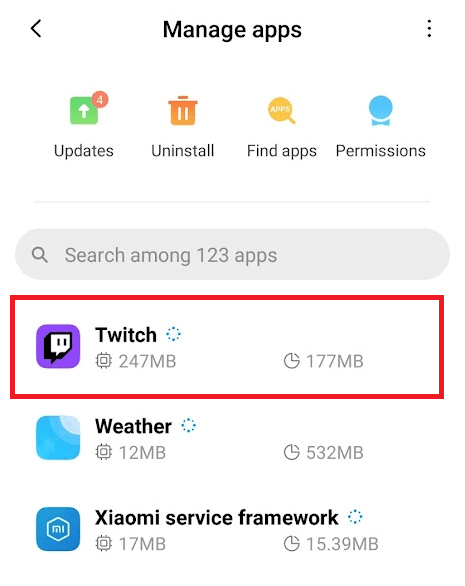 4. Tap on the Clear data option from the bottom, as shown. 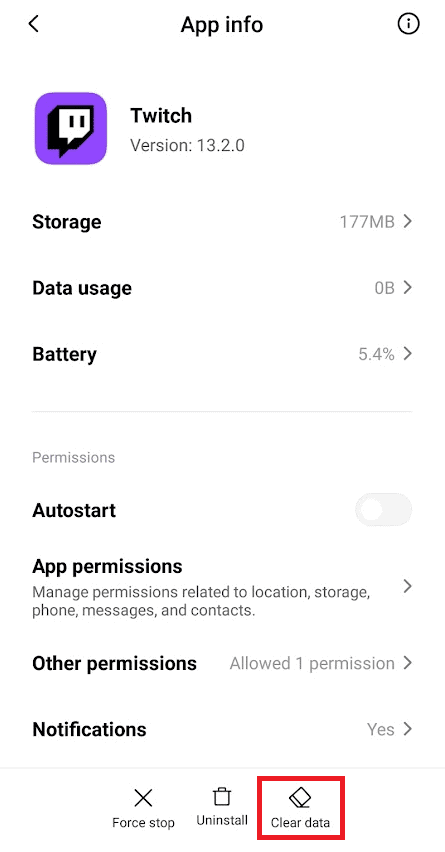 5. Tap on Clear cache > Clear all data one by one. 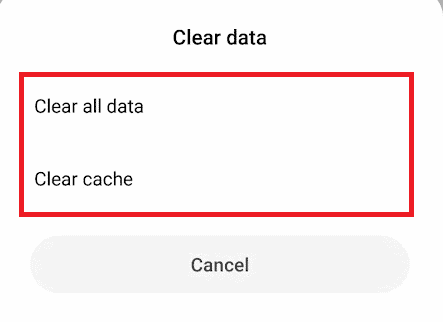 Finally, if nothing works, you will need to reinstall the Twitch app on your device to download the latest build of the app.

2. Tap on the Uninstall option. 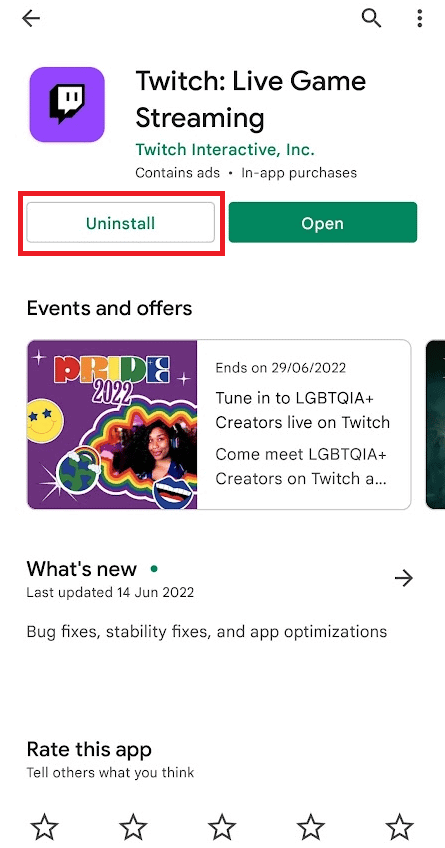 3. After uninstallation is completed, tap on Install to reinstall it.

4. After reinstallation, set up the Twitch app with your account and see if the discussed issue is fixed or not.

We hope you got the answer to is Twitch down right now question and learned the methods to fix the Twitch app not working on Android. Feel free to reach out to us with your queries and suggestions via the comments section below. Let us know what topic you want to learn about in our next article. 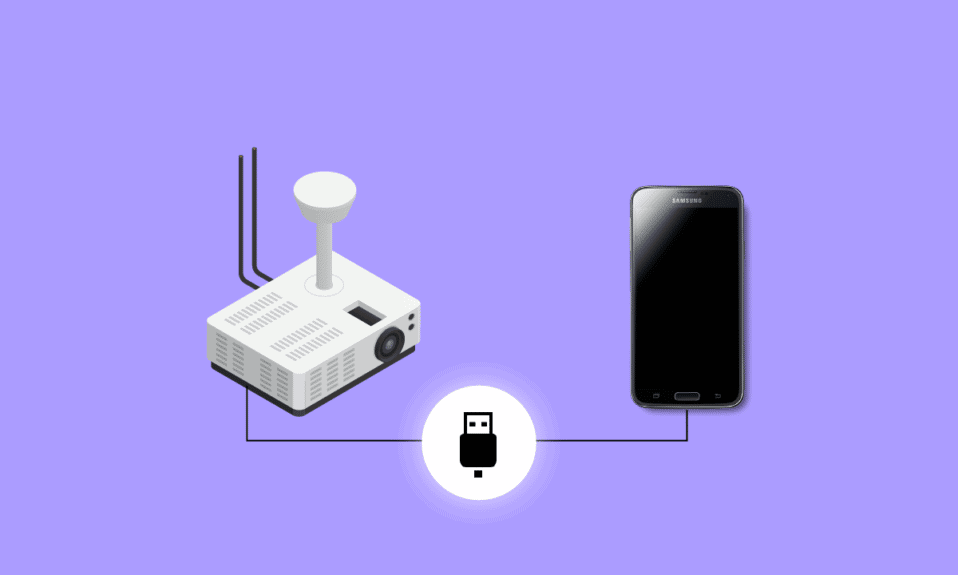 How to Connect Phone to Projector via USB