Remove Android Viruses Without a Factory Reset: Desktop and PC’s are the source of storage of one’s personal files & data. Some of these files are downloaded from the Internet and some are transferred from other devices like phones, tablets, hard disk, etc. The problem with downloading files from the Internet or even transferring files from other devices is that there is a risk of the files being infected. And once these files are on your system, your system will become infected with viruses & malware which can cause a lot of damage to your system.

At one point of time in the 20th century, computers were the only main source of viruses & malware. But as technology started evolving and growing, the use of modern devices like smartphones, tablets, etc. started growing exponentially. So apart from computers, Android smartphones have also become a source of viruses. Not only this, but smartphones are likely to be infected than your PC, as people nowadays share everything using their mobile. Viruses & malware can damage your Android device, steal your personal data or even your credit card information, etc. So it is very important & necessary to remove any malware or viruses from your Android device. 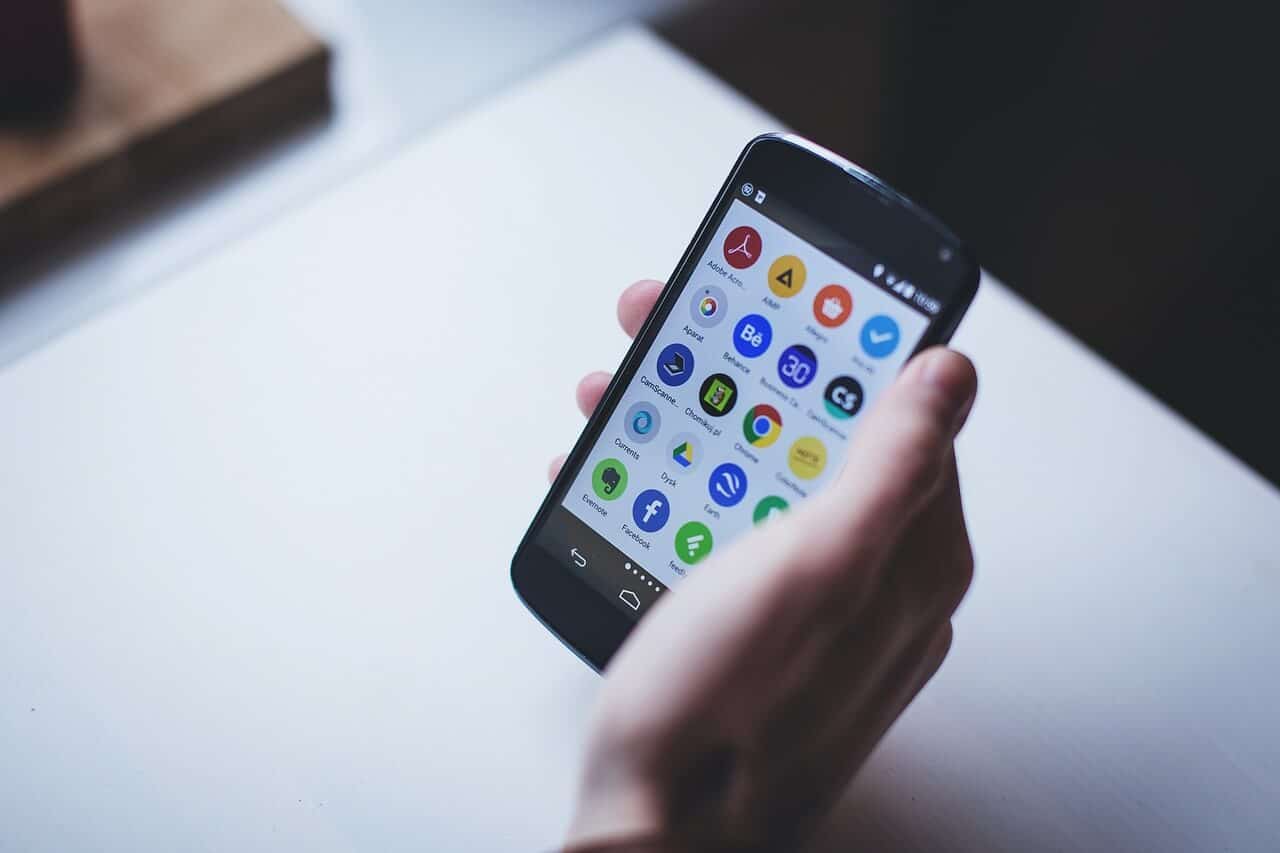 The best way which everyone recommends to completely remove viruses & malware from your Android device is to perform a factory reset which will completely erase all of your data including the viruses & malware. Sure this method works well, but at what cost? You can potentially lose all of your data if you don’t have a backup and the issue with backup is that the file infected by virus or malware may be still present. So in short, you need to delete everything in order to get rid of the viruses or malware.

Performing factory reset means that you are setting your device to its original state by erasing all of the information in an attempt to restore the device to its original manufacturer settings. So it will be a very tiring process to start again and install all the software, apps, games, etc on your device. And you could also take a backup of your data but as I have already said that there is a chance that the virus or malware may come back again. So if you take a backup of your data you need to rigorously scan the backup data for any sign of viruses or malware.

Now the question arises if the factory reset method is out of the question then what should one do to completely remove viruses & malware from Android device without losing all your data? Should you let viruses or malware to continue to damage your device or should you let your data being lost? Well, the answer to all these questions is that no you don’t need to worry about anything as in this article you will find a step by step approach to removing viruses & malware from your device without losing any data.

In this article, you will get to know how you can remove viruses from your Android device without a factory reset and without losing any data. But before you reach the conclusion that your device has a been infected with a virus or malware, first of all, you should determine the problem. And also, if there is some issues or problem with your device that it doesn’t automatically means that your device is infected. For example, if your device slows down then the possible reasons behind this problem can be:

So as you see, behind every problem with your Android device, there can be numerous causes. But if you’re sure that the main cause of the issue you’re facing is virus or malware then you can follow the below guide to remove viruses from your Android device other than performing a factory reset.

How to Remove Android Virus without a Factory Reset

Below are given several methods to remove viruses & malware from your Android device:

Safe mode is a mode where your phone disables all the installed applications & games and loads only the default OS. Using Safe Mode you can find out if any app is causing the issue and once you have zero-in on the application then you can safely remove or uninstall that app.

1.Press and hold the Power button of your phone until the phone power menu appears.

2.Tap on the Power off option from the power menu and keep on holding it until you get a prompt to reboot to Safe mode. 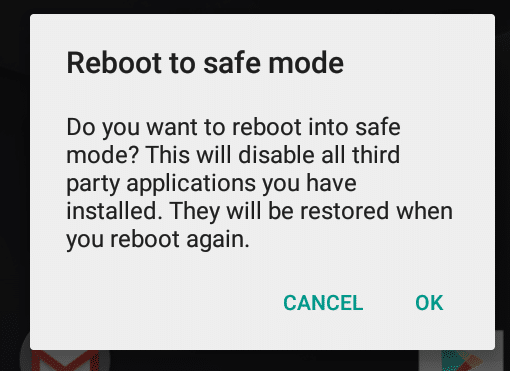 4.Wait for your phone to reboot.

5.Once your phone will be rebooted, you will see a Safe mode watermark in the bottom left corner.

If there is any problem in your android phone and it will not boot normally then follow the below steps to boot the powered off phone directly into the safe mode:

1.Press and hold the power button as well as the volume up and volume down buttons.

2.Once your phone’s logo will appear, let go of the power button but keep holding the Volume up and volume down buttons.

3.Once your device boots up, you will see a Safe mode watermark in the bottom left corner.

Note: Based on your mobile phone manufacturer the above method of rebooting the phone to safe mode may not work, so instead you should do a Google search with a term: “Mobile Phone Brand Name” Boot into Safe Mode.

Once the phone reboots into Safe mode, you can manually uninstall any app that you have downloaded at the time when the problem on your phone started. To uninstall the problematic application, follow the below steps:

1.Open Settings on your phone.

2.Under settings, scroll down and look for Apps or Apps & Notifications option. 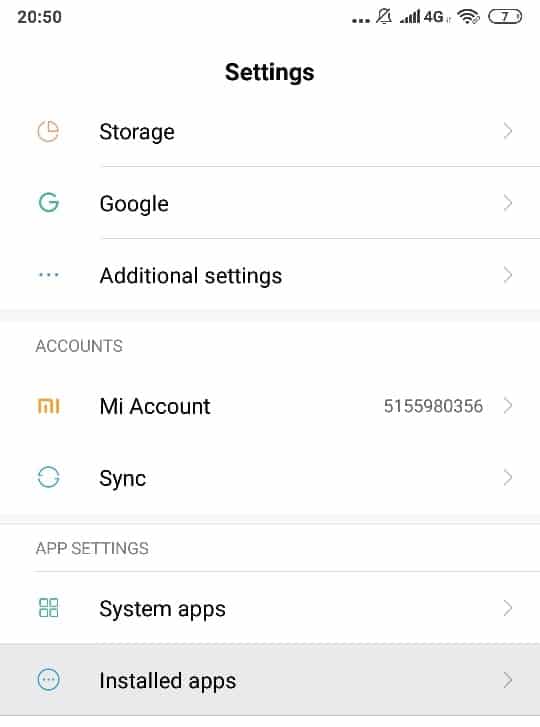 Note: If you can’t find Installed Apps, then just tap on App or Apps & Notifications section. Then look for Downloaded section under your App settings.

4.Click on the App which you want to uninstall.

5.Now click on the Uninstall button under the App name in order to remove it from your device.

6.A warning box will appear asking “Do you want to uninstall this app“. Click on the OK button to continue. 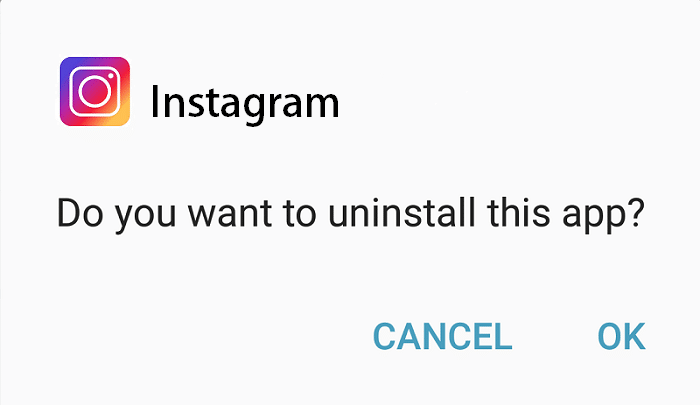 7.Once all the apps which you wanted to remove are uninstalled, again reboot your phone normally without entering into Safe mode.

a.Open Settings on your Android device.

b.Under Settings, look for Security option and tap on it. 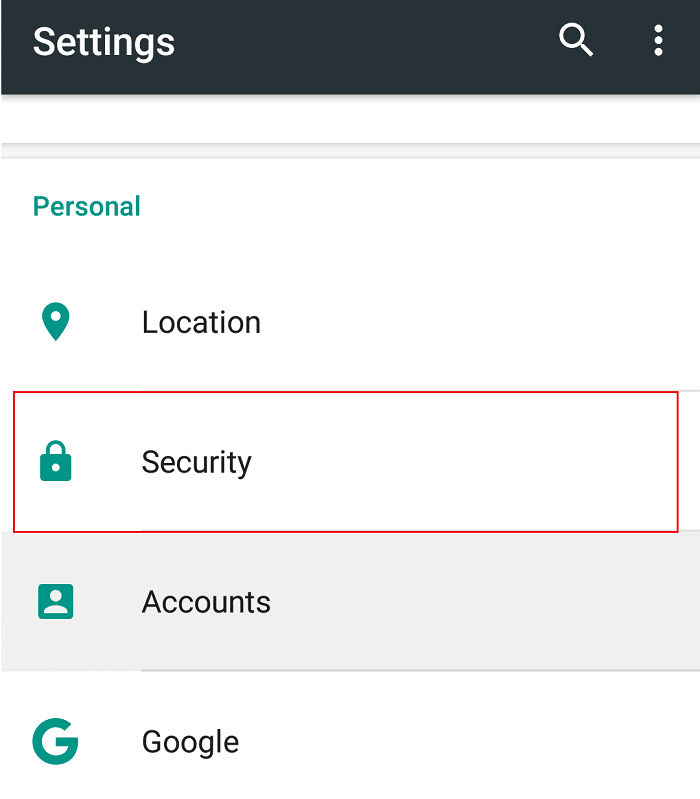 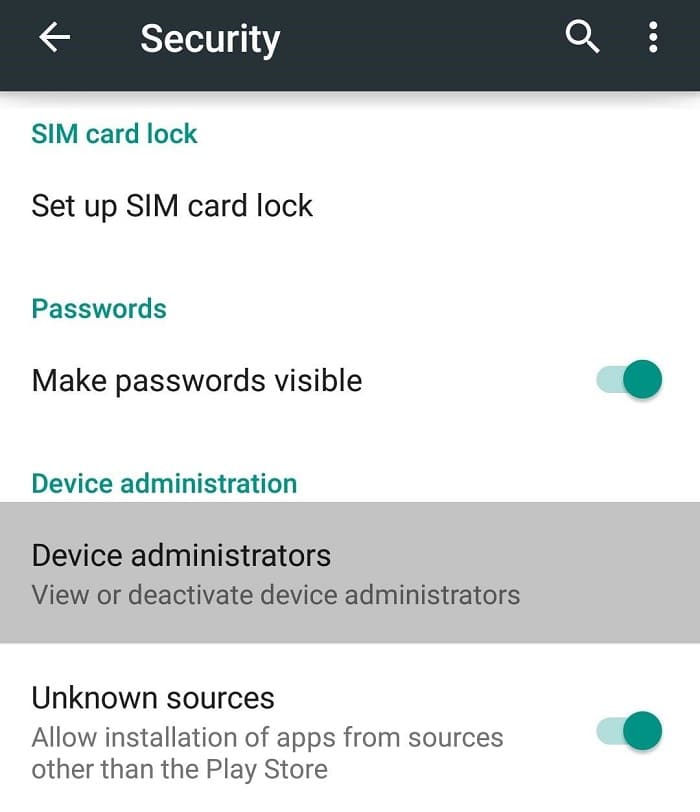 d.Tap on the app which you want to uninstall and then tap on Deactivate and Uninstall. 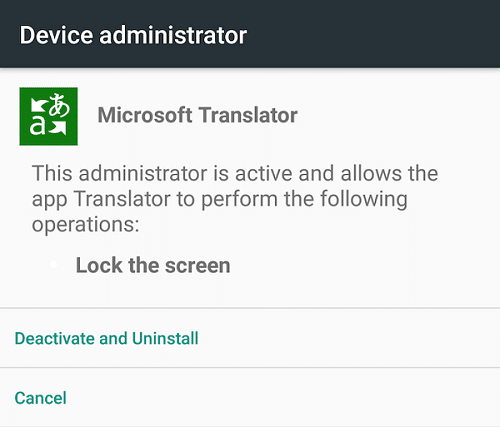 e.A pop-up message will come which will ask “Do you want to uninstall this app?“, tap on OK to continue. 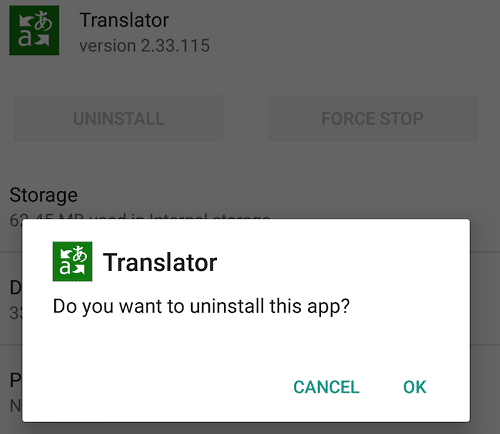 After completing the above steps, reboot your phone and the virus or malware should be gone.

Antivirus is a software program which is used to prevent, detect, and remove malware & viruses from any device with an operating system installed. So, if you find out that your android phone or any other device is infected with virus or malware then you should run an Antivirus program to detect & remove the virus or malware from the device.

Antivirus is a third party software which you need to download and install on your device in order to protect your device from harmful viruses and malware. There are plenty of Antivirus apps available under Google Play Store but you should not install more than one Antivirus on your device at a time. Also, you should only trust reputed Antivirus such as Norton, Avast, Bitdefender, Avira, Kaspersky, etc. Some of the Antivirus apps on Play Store are complete garbage and some of them aren’t even Antivirus. Many of them are Memory booster & Cache cleaners which will do more harm than good to your device. So you should only trust the Antivirus which we mentioned above and never install anything else.

To use any one of the above-mentioned Antivirus to remove virus from your device follow the below steps:

Note: In this guide, we will use Norton Antivirus but you can use anyone from the above list, as the steps will be similar.

1.Open the Google play store on your phone. 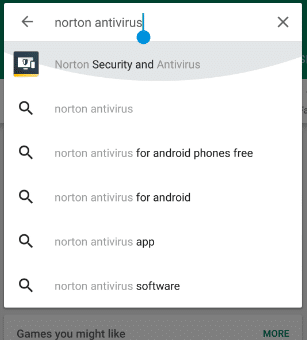 3.Tap on Norton Security and Antivirus from the top under search results.

4.Now tap on the Install button. 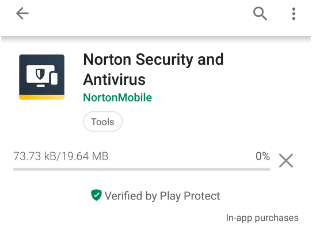 6.Once the app is completely downloaded, it will install itself.

7.When the Norton Antivirus finish installing, below screen will appear: 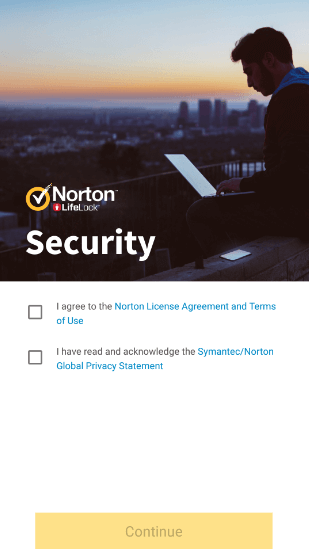 8.Check the box next to “I agree to Norton License Agreement and Terms of Use” and “I have read and acknowledged the Norton Global Privacy statement“. 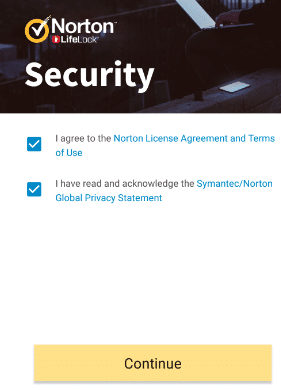 9.Tap on Continue and the below screen will appear. 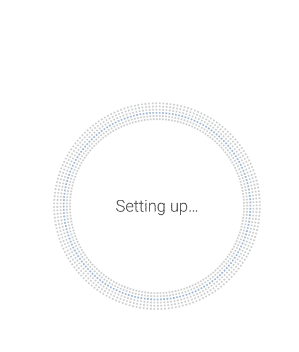 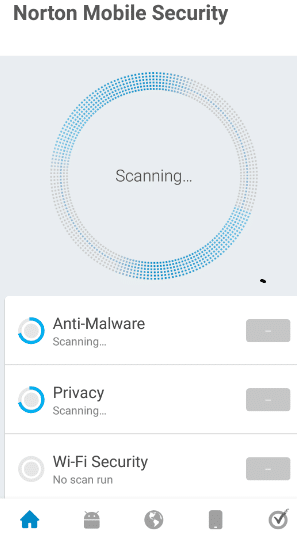 11.After the scanning is completed, the results will be displayed. 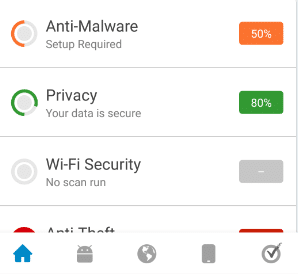 After completing the above steps, if the results are showing that there is any malware present on your device then the Antivirus software will automatically remove the said virus or malware and will clean your phone.

Once you have uninstalled or removed the malicious apps, virus or malware-infected files from your phone you should run a thorough clean up of your Android device. You should clear device & apps cache, clear history & temporary files, any third-party apps which might affect system performance, etc. This will make sure that there is nothing left by malicious apps or viruses on your phone and you can continue to use your device without any issues.

You can clean your phone using any third-party app that is used for cleaning the phone, but in most cases, these apps are full of junk & ads themselves. So you need to be very careful before choosing any such app, if you ask me, do this manually instead of relying on some third-party app. But one app which is very trusted and can be used for the above purpose is CCleaner. I myself have used this app many times and it doesn’t let you down. CCleaner is one of the good and reliable apps for removing unnecessary files, cache, history and other garbage from your phone. You can easily find CCleaner in the Google Play store.

It is recommended that once you have cleaned your phone that you should take a back up of your device which includes files, apps, etc. This is because it will be easier to recover your device from any future issues that may arise.

I hope this article was helpful and now you can easily Remove Android Viruses Without a Factory Reset, but if you still have any questions regarding this tutorial then feel free to ask them in the comment’s section.