Every time you click on an application icon to launch it, a process is automatically created by Windows for the executable file and a unique process ID is assigned to it. For example: When you open Google Chrome web browser and check Task Manager, you will see a process named chrome.exe or Chrome listed under Processes tab with PID 4482 or 11700, etc. On Windows, many applications, especially the resource-heavy ones, are prone to freezes and become non-responsive. Clicking on the X or Close icon to close these frozen applications often, does not yield any success. In such a scenario, you may need to forcefully terminate the process to shut it down. Another reason to kill a process is when it is hogging up a lot of CPU power and memory, or it is frozen or not responding to any inputs. If an app is causing performance issues or preventing you from launching associated applications, it would be wise to exit it. There are three different ways on how to kill a process in Windows 10, namely, through Task Manager, Command Prompt, and PowerShell, as explained in this article. 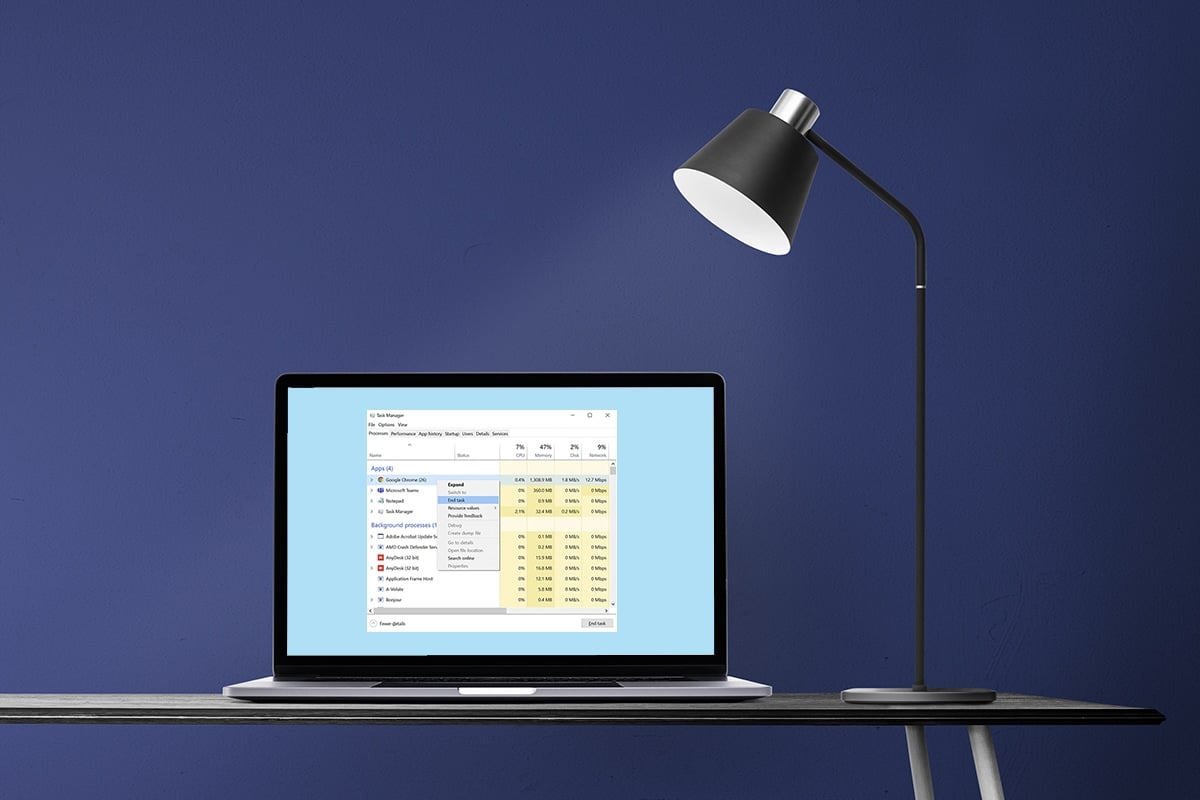 3 Ways To Kill A Process In Windows 10

If a program stops responding or behaves unexpectedly and does not even allow you to close it, then you can kill its process to forcefully close the program. Traditionally, Windows allows users to do so through Task Manager and Command Prompt. In addition, you can also use PowerShell.

Terminating a process from Task Manager is the most traditional and straightforward approach. Here, you can observe system resources utilized by each process, and check computer performance. The processes can be sorted based on their names, CPU consumption, Disk/Memory usage, PID, etc. to narrow down the list as per your convenience. Here’s how to kill a process using Task Manager:

2. If reqd, click on More Details to view all the processes running on your system currently. 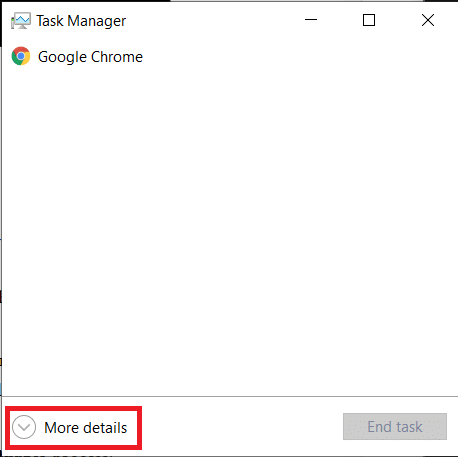 3. Right-click the process which you want to terminate and click on End task, as shown. We have shown Google Chrome as an example. 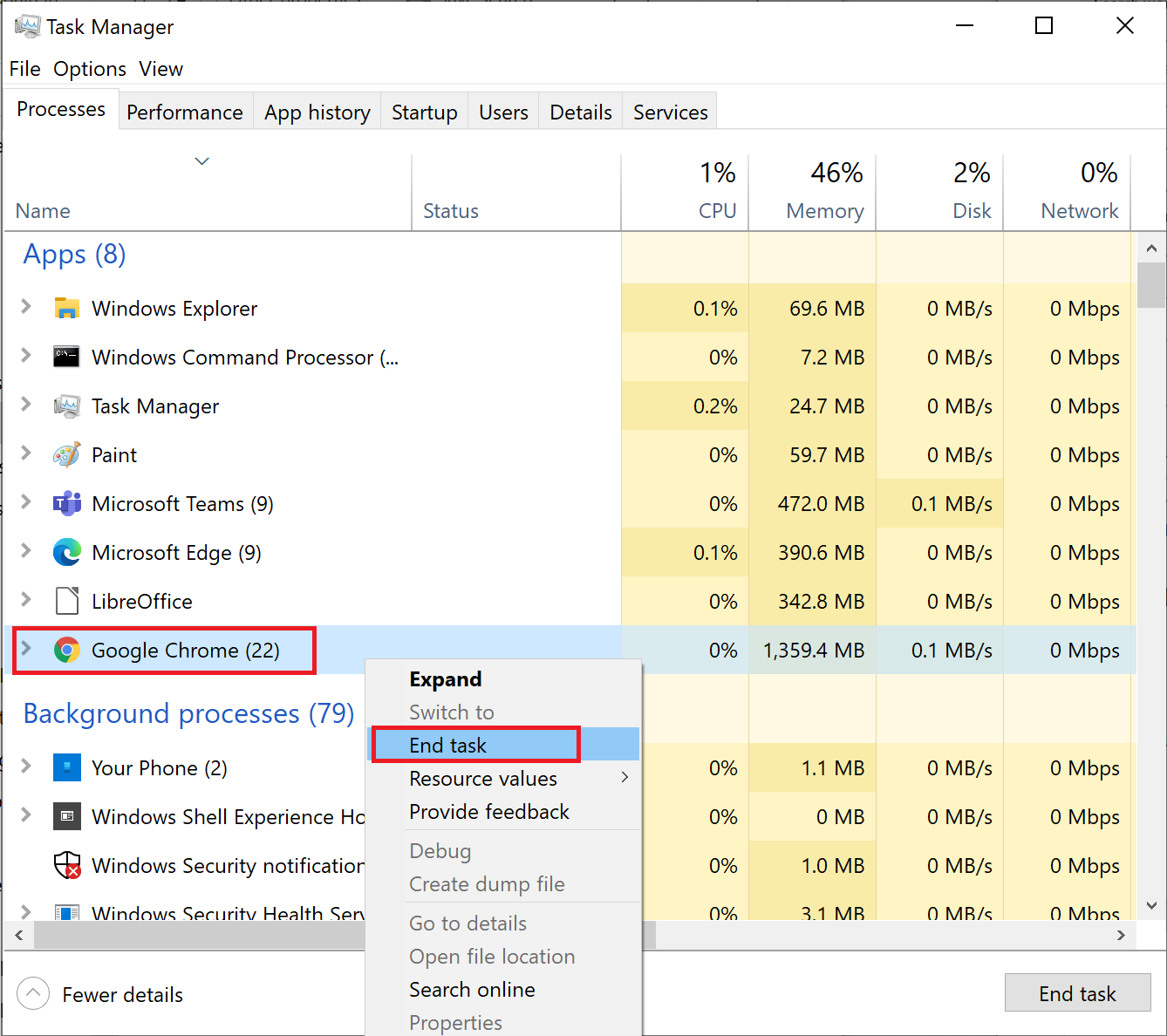 Method 2: Use Taskkill in Command Prompt

While terminating processes from Task Manager is a cakewalk, you have to admit that it is pretty lackluster. The disadvantages of using Task Manager are:

Hence, you can use Command Prompt instead.

Note: To terminate a process running with administrative rights, you will need to launch Command Prompt as administrator.

1. In the Windows search bar, type cmd and click on Run as administrator as shown. 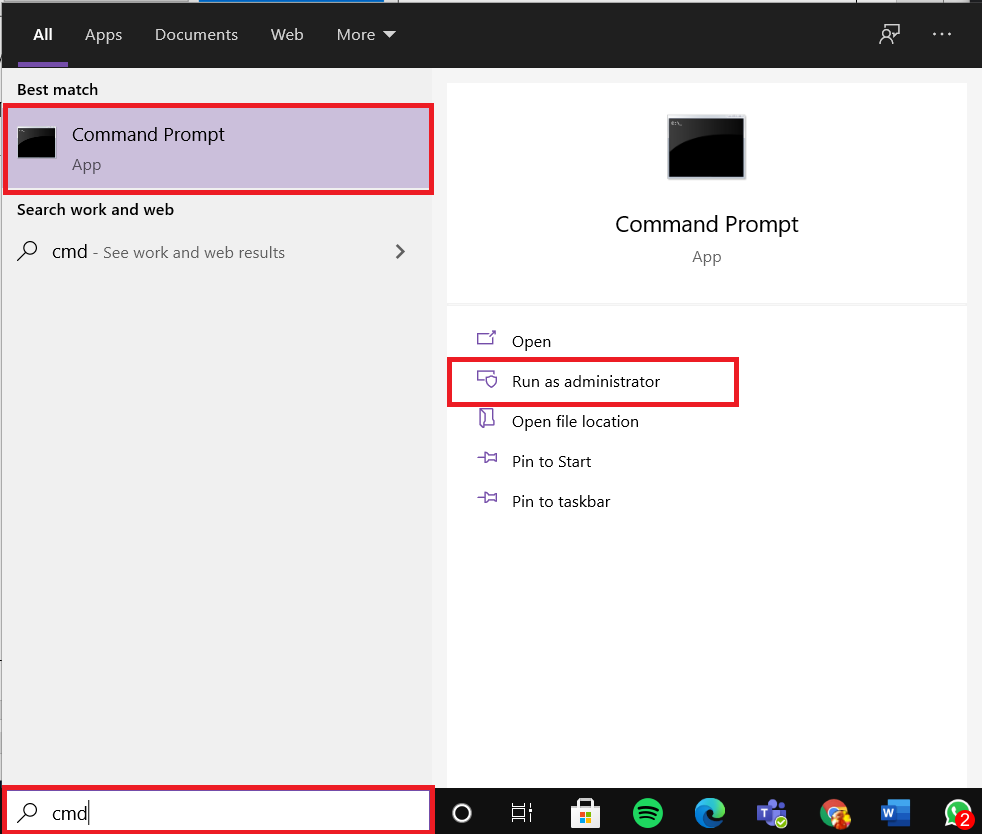 2. Type tasklist and press Enter key to get the list of all running processes. 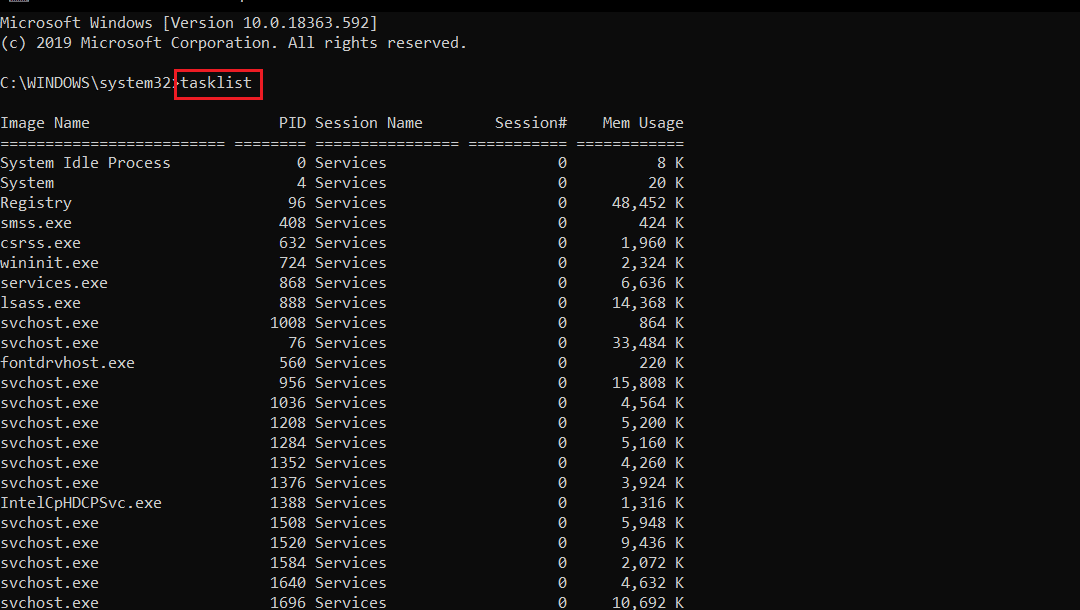 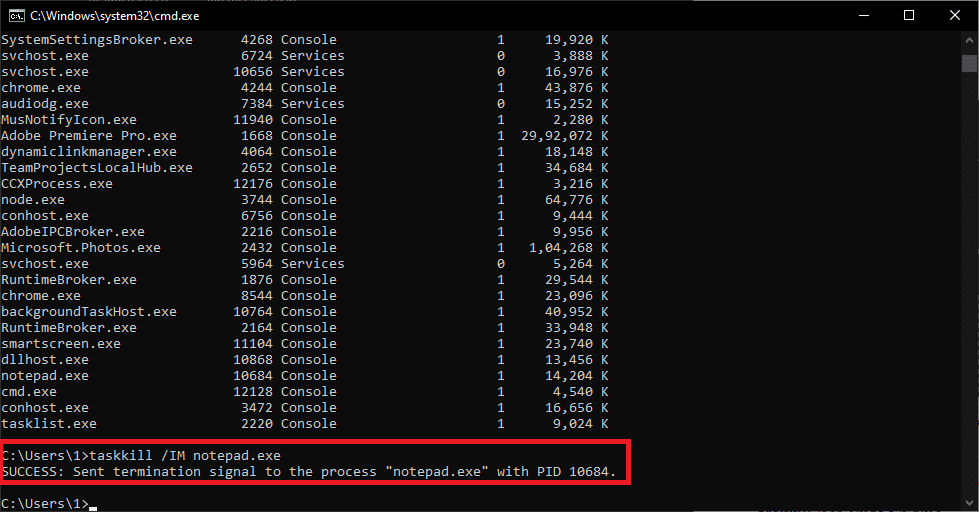 3B. Type taskkill/PID PID number to terminate a process using its PID number and press Enter key to execute.

For example: To terminate notepad using its PID number, type taskkill/PID 11228 as depicted below. 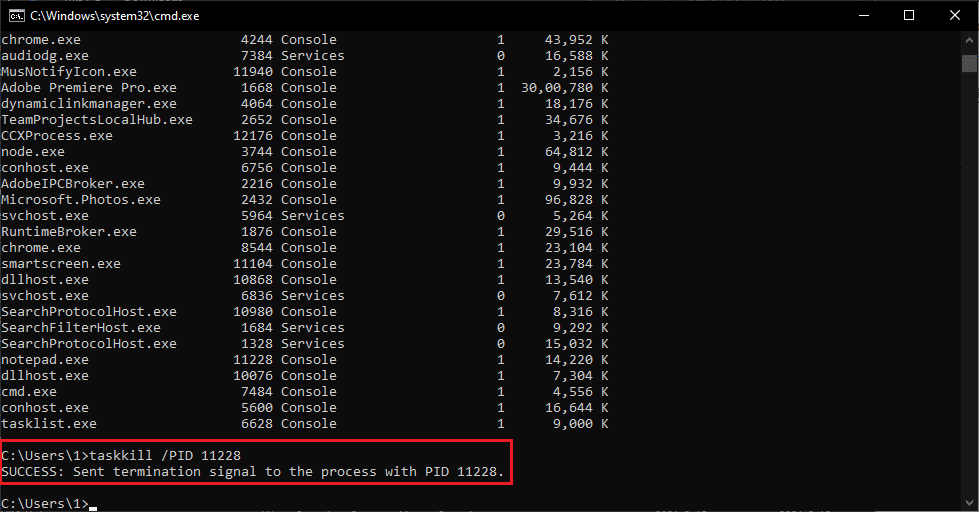 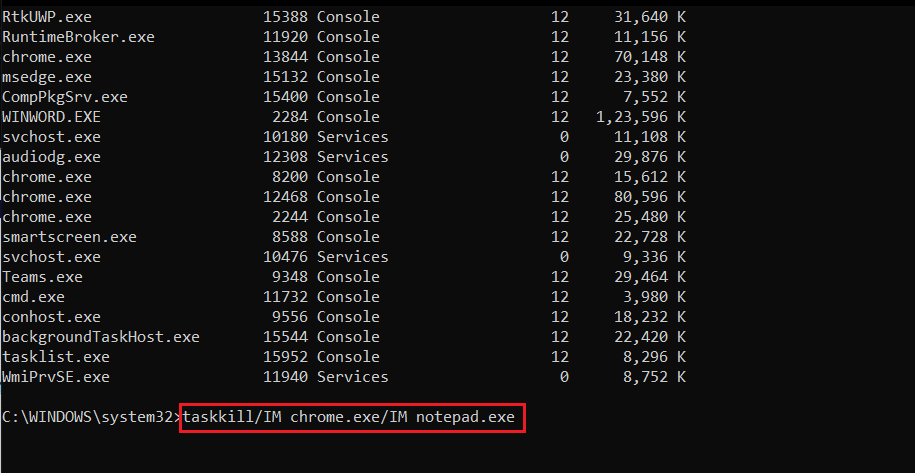 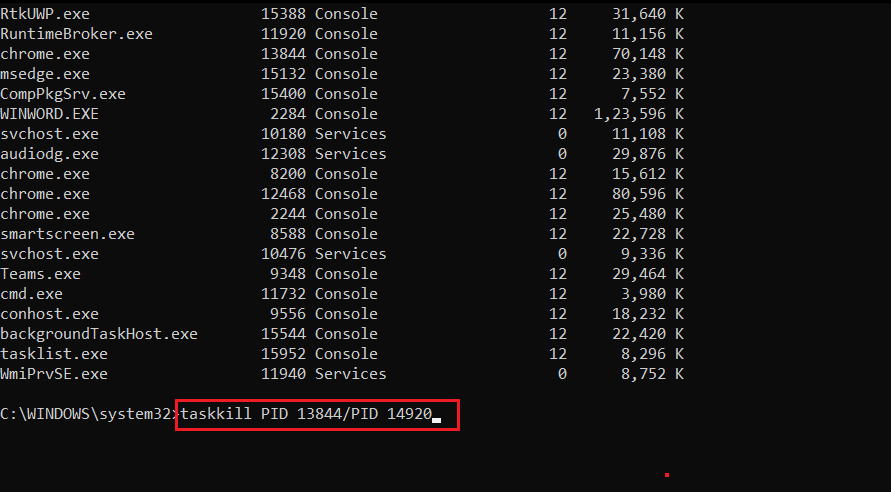 5. Simply, add /F in the above commands to kill a process forcefully.

To learn more about Taskkill, type taskkill /? in Command Prompt and hit Enter to execute. Alternately, read about Taskkill in Microsoft docs here.

Likewise, you can use the tasklist command in PowerShell to attain a list of all running processes. Although to terminate a process, you will need to use the Stop-Process command syntax. Here’s how to kill a process via Powershell:

1. Press Windows + X keys together to bring up the Power User Menu.

3. Type the tasklist command and press Enter to get a list of all processes. 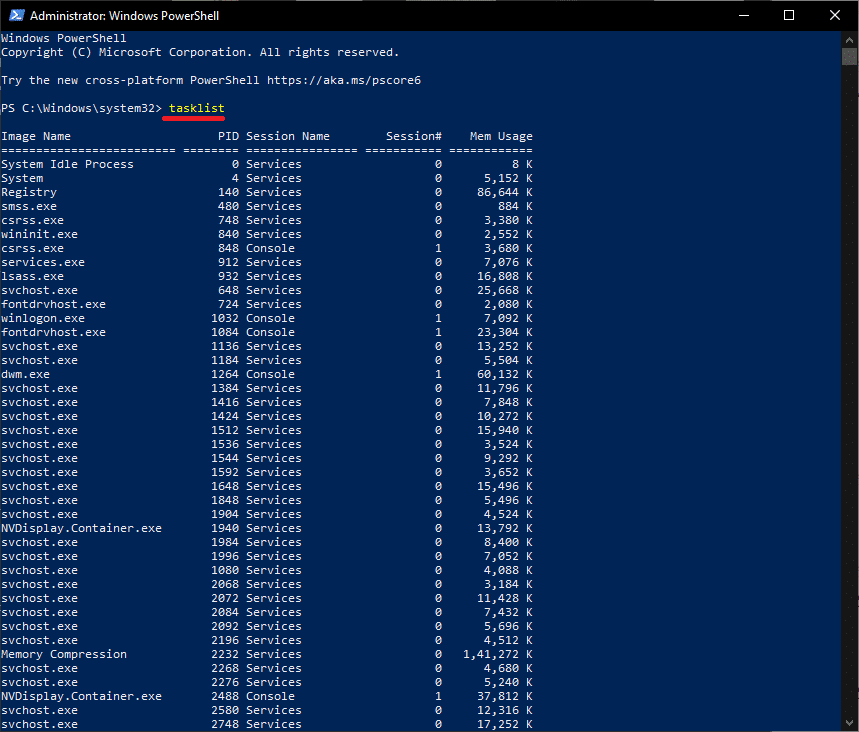 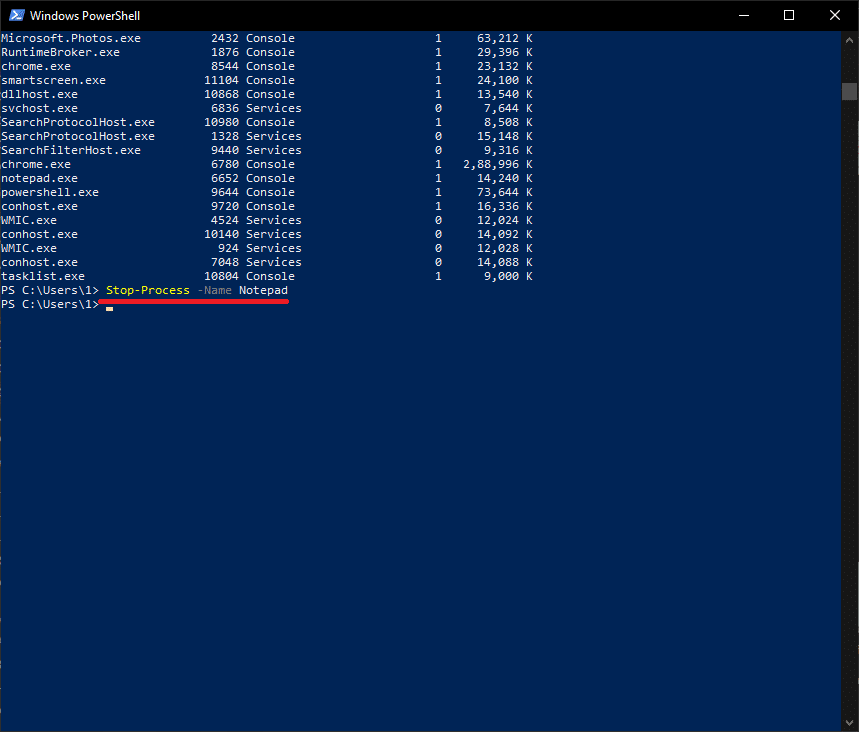 3B. Type Stop-Process -Id processID to terminate a process using its PID and press Enter key.

For example: run Stop-Process -Id 7956 to end task for Notepad. 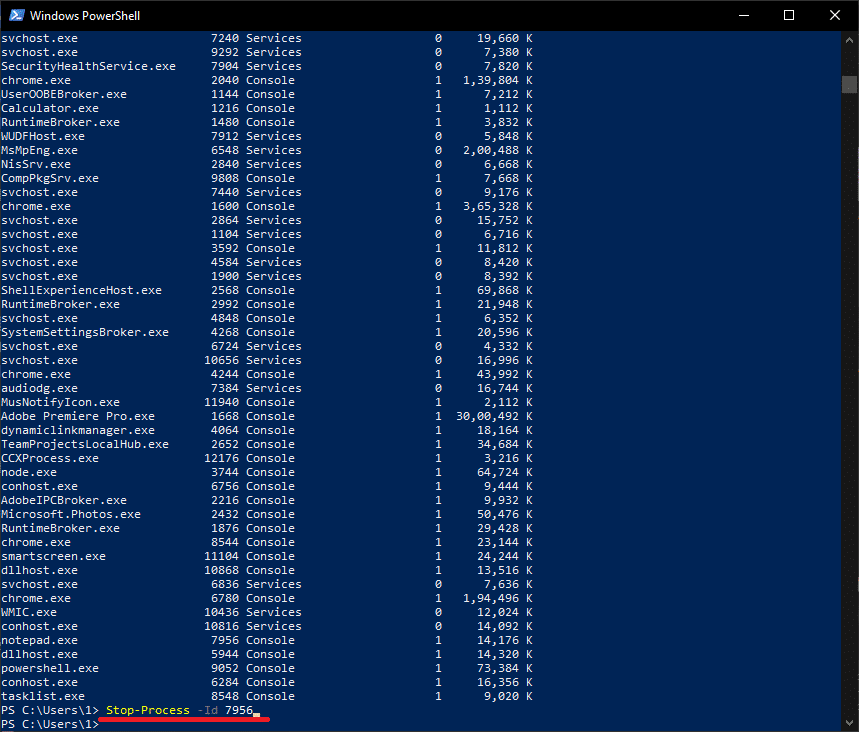 4. Add -Force with the above commands to forcefully close a process.

Q1. How do I force to kill a process in Windows?

Q2. How do I kill all processes in Windows?

Ans. Processes of the same application are clustered under a common header in the Task Manager. So to kill all its processes, simply terminate the cluster head. If you wish to terminate all background processes, then follow our article to disable background apps. You can also consider performing a clean boot.

We hope that you learnt how to kill a process on Windows 10 PC. If you have any queries/suggestions regarding this article, then feel free to drop them in the comments section.