Are you looking for the best camera apps for your Android phone? Does the stock camera app doesn’t take good pictures? Well, we are going to talk about the 8 Best Android Camera which you can try in 2022.

In this era of the digital revolution, smartphones have taken up a huge chunk of our lives. They have the ability to perform many different functions such as showing the time, writing down notes, clicking pictures, and whatnot. Mobile companies are working extra hard to make their cameras better so that they could stand out in the market. Obviously, you cannot compare a mobile camera to a DSLR, but nowadays they are becoming better and better each day. 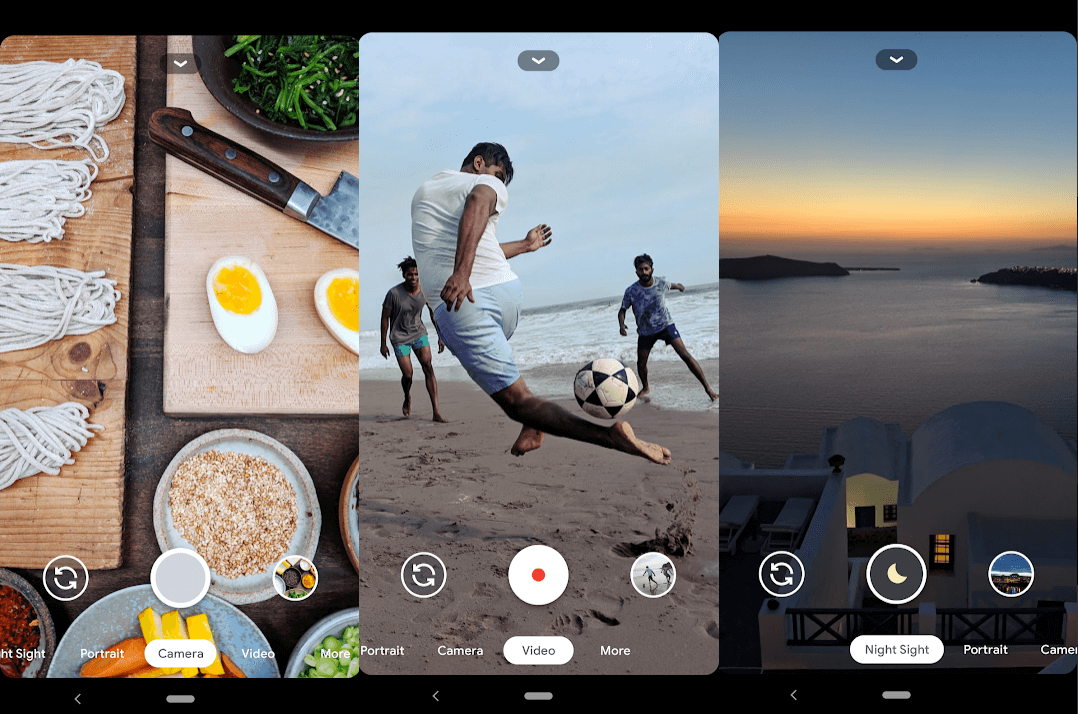 However, sometimes the default camera of the phone might not quench your thirst and leave you wanting for more. That is not a problem either. Now there are thousands of third-party apps that you can use to make your shooting experience far better. It is, however, becomes quite difficult to choose among the wide range of apps out there and decide which one is the best suit for you. If you are confused as well, be not afraid my friend. I am here to help you with that. In this article, I am going to help you in deciding what app you should choose by talking about the 8 best Android camera apps of 2022. You will also get to know the details of each app and every tip and trick about them. Make sure to read the article to the end. So, without wasting any more time, let us begin. Read along.

Below mentioned are the best camera apps for Android: 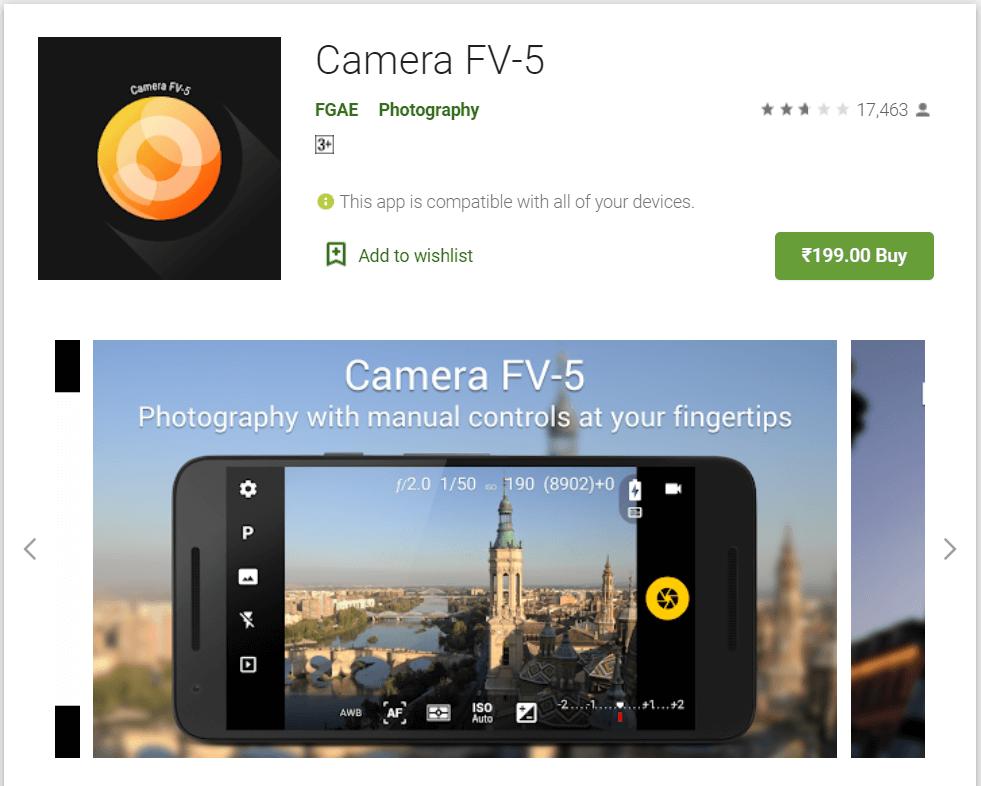 First of all, the Android camera app I am going to talk to you about is Camera FV-5. This is one of the best DSLR camera apps for Android available in the market right now. The unique feature of this app is that it makes you enable to use almost every DSLR manual photography controls in your Android smartphone. I would recommend this app to professionals as well as photography enthusiasts. However, beginners would do well to steer clear from it as it takes quite a lot of knowledge to properly use the app. The app gives you access to total control over a wide array of features such as shutter speed, ISO, white balance, light-metering focus, and many more.

The Camera FV-5 Android app comes with a user interface (UI) that is intuitive, making it so simple for the users to handle the app. In addition to that, tons of amazing features add to its benefit. Some of these features include Manual Shutter Speed, Exposure Bracketing, and many more. However, as like everything else, this app too has its own set of drawbacks. The light version, which is given free of charge by the developers, generates images that are of low quality. Overall, it is an amazing app for you to use. 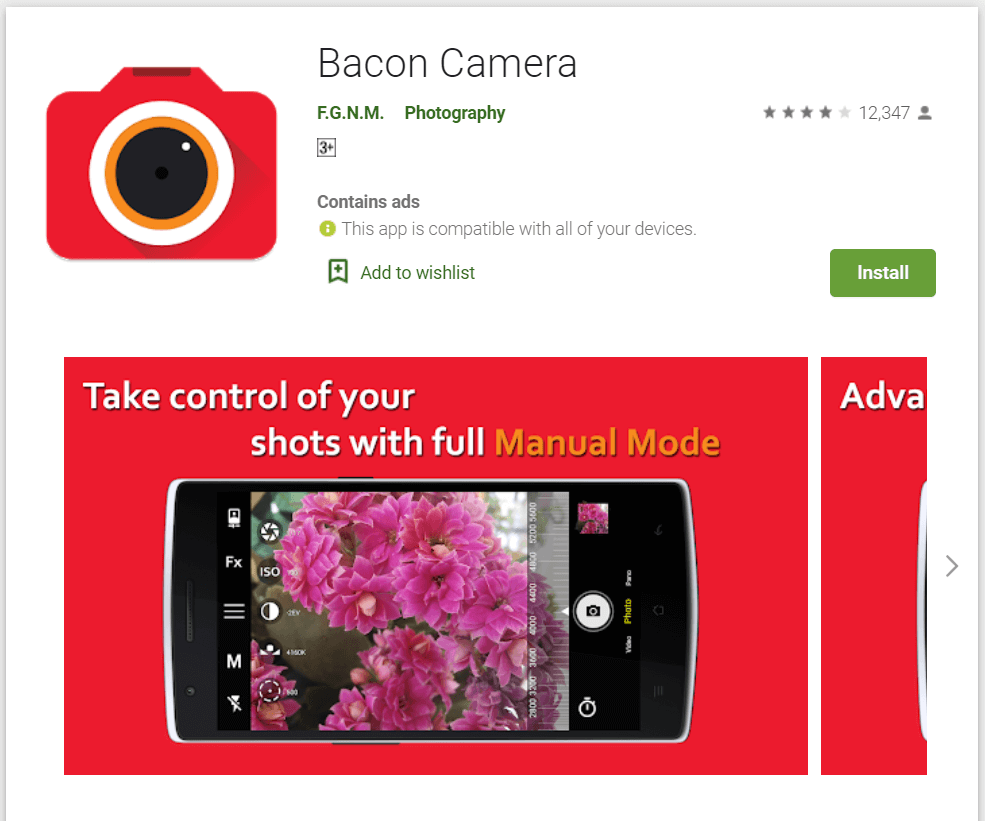 Now, the next Android camera app I would attract your attention is called Bacon Camera. I know the name sounds quite funny, and to be honest, weird, but please, bear with me. This camera app is a really great one that definitely deserves your attention. The app comes with a wide range of manual features such as ISO, focus, white balance, exposure compensation, and many more. In addition to that, apart from the traditional and widely used JPEG format, the app also supports RAW and DNG formats for your image. Not only that, you can even get access to manual controls even if your smartphone does not support the camera 2 API from Google. Some of the other features that are pretty useful include panorama mode, timed shots, and GIF support. As though all of this was not good enough, the pro version of this app comes at an astoundingly low rate. This is especially useful for those of you trying to make do in a budget. 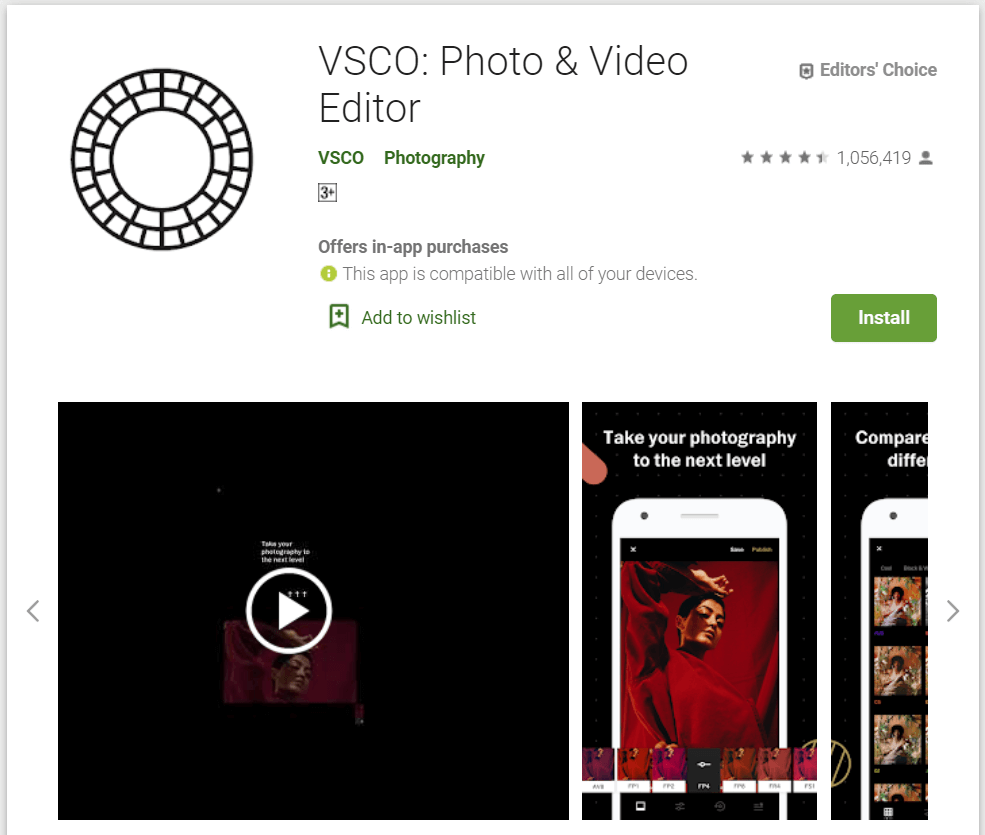 Let us take a look at the next Android camera app on the list – VSCO. This is without a doubt one of the most amazing Android camera apps of 2022 out there in the market. The camera mode is really minimalist. However, the app has powerful features in its store. The unique one is of course that it lets you shoot whatever you want to in RAW format. In addition to that, features such as ISO, exposure, white balance, and many more can be adjusted manually as well.

The app also comes with a photo community that is built around it. Therefore, you can share your photos with this community and receive feedback. Not only that, but there are also photography competitions going on in the community that you can take part in. This is especially useful for you in case you are a photography hobbyist who would love to share their content with others.

Ten of the presets are available for free. For getting access to its vast collection of amazing presets, you are going to have to pay an annual subscription worth $19.99. In case you choose to subscribe, you will also be granted access to many more spectacular as well as advanced editing tools such as more detailed color adjustments. 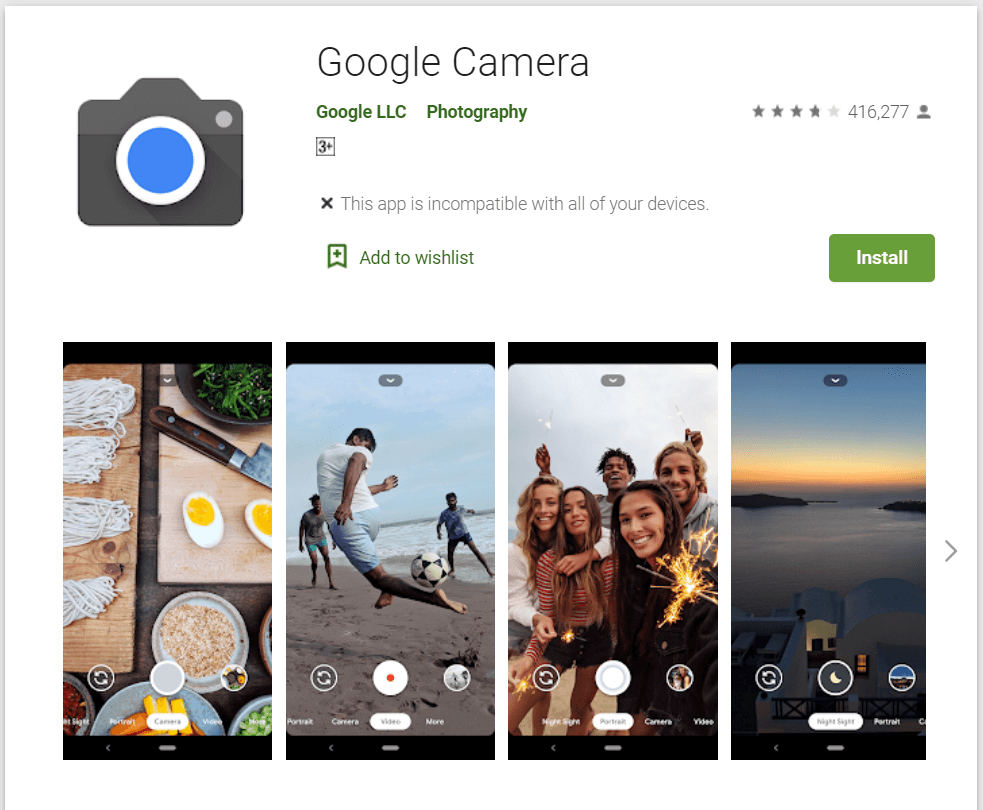 If you are not living under the rock – which I am sure you are not – you have definitely heard of Google. Google Camera is a proprietary Android camera app from the company. The app comes pre-installed in every Google Pixel device. Not only that, thanks to the brilliance of the Android community, Google Camera Ports have been developed by many. This resulted in the app being present on many different Android smartphones.

Therefore, you can make use of all the available features of the app on your Android smartphone. Some of these features include HDR+, intuitive portrait mode, and many more. In addition to that, a selected range of Android phones also come with the recently added feature called Night Sight of Google Pixel 3. This feature allows users to capture stunning images in the dark. 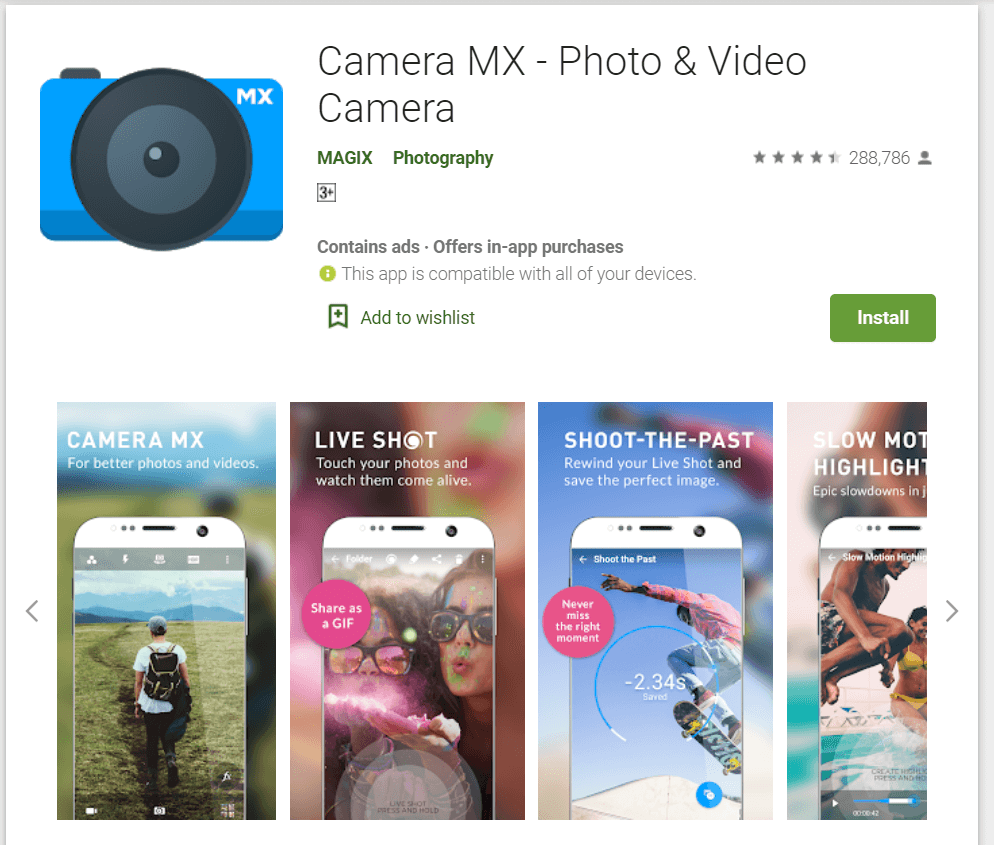 Now, let us take a look at one of the oldest as well as one of the most widely loved Android camera apps – Camera MX. Although this is a really old app, the developers make sure to update it regularly. Therefore, it stays current and competent in the present-day market as well. You can shoot photos as well as videos with it. In addition to that, the app has a wide range of shooting modes to offer. In case you are someone who loves to make GIFs, there is a GIF mode available for you as well. There is also a built-in photo editor that is going to take care of the basic editing part. However, in case you are a professional or someone who is in the business for long, I would suggest you look for some other apps. 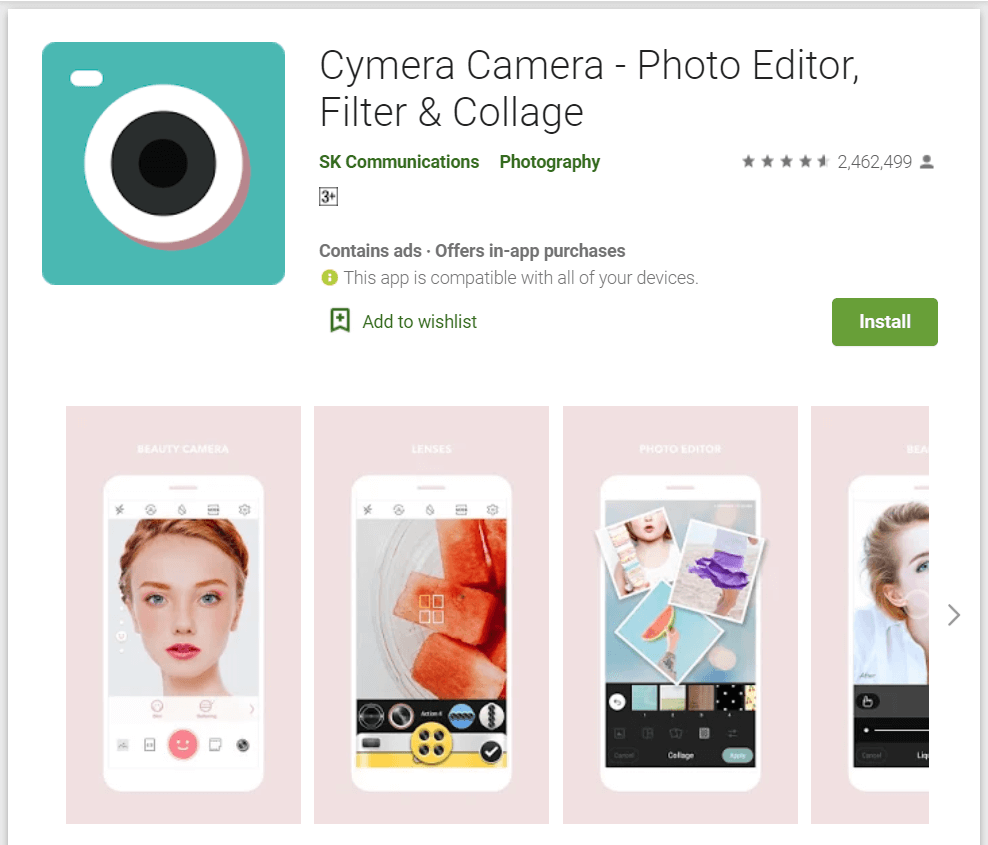 Are you someone who is a casual photographer? A beginner with little to no knowledge who would still like to capture beautiful pictures? I present to you Cymera. This is an Android camera app aimed at casual users. It comes loaded with tons of features such as various shooting modes, more than 100 selfie filters, auto retouching tools, and many more. You can choose from seven distinct lenses to capture things with. In addition to that, some of the basic editing features such as red-eye removal are also available.

Another great feature of this app is that you can upload your images to social media sites such as Instagram directly from the app, thanks to the built-in feature. Therefore, in case you are a social media addict, this app is perfect for you. 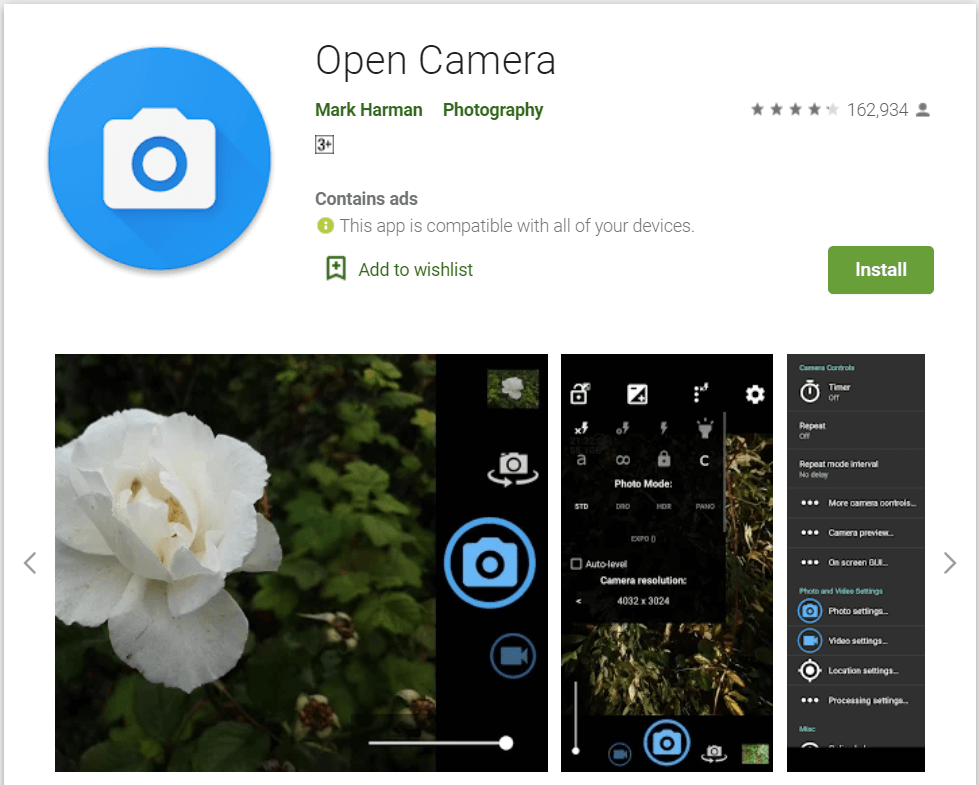 Searching for an Android camera app that comes free of cost along with zero ads and in-app purchases? Let me present to you Open Camera app. The app is lightweight, occupying less space in your phone, and loaded with tons of features. It is available for both Android smartphones as well as tablets.

Some of the most amazing features of the app are auto-stabilizer, focus mode, HD video recording, scene modes, HDR, handy remote controls, geotagging of photos as well as videos, configurable volume keys, small file size, support for an external microphone, dynamic range optimization mode, and many more. In addition to that, the GUI is optimized for both right and left-handed users to the utmost perfection. Not only that, the app is open-sourced, adding to its benefits. However, it sometimes cannot focus on objects properly. 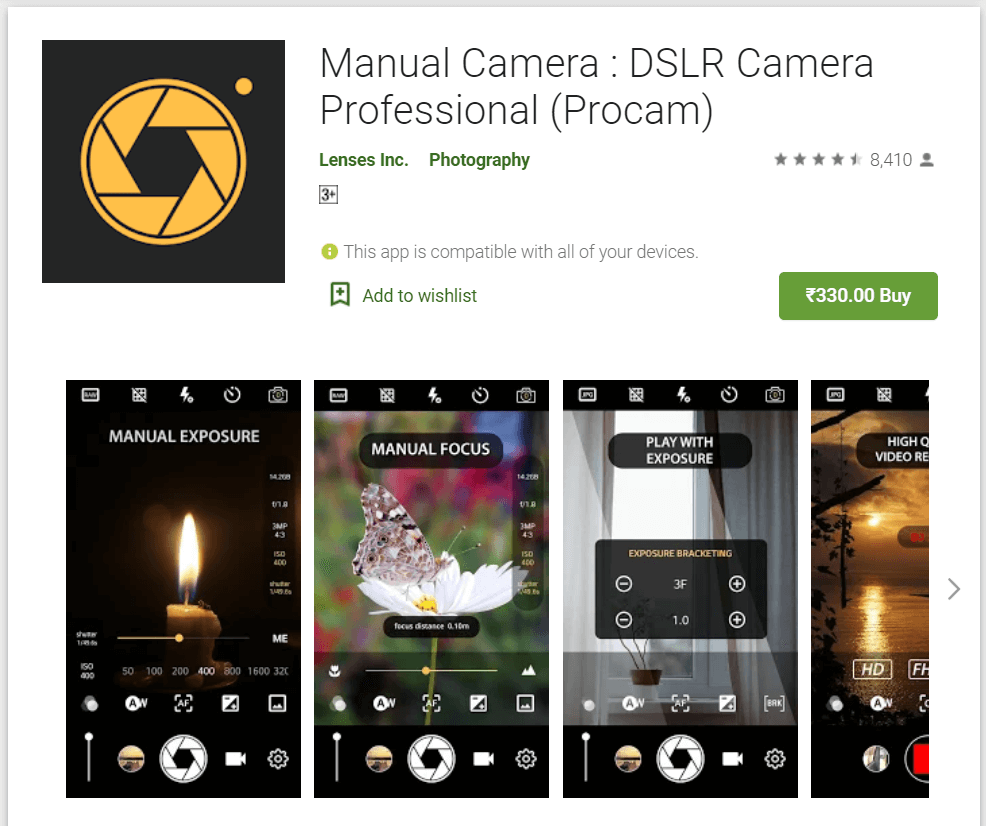 Are you someone who uses an iPhone? Searching for a camera app that is loaded with pro features but comes with a minimalistic user interface (UI)? Look no further than Manual Camera. Now, in case you are wondering what this app actually does, just look at the name for the clue. Yes, you guessed it right. This is a camera app that is specifically built for customizing whatever it is that you have captured. Therefore, I would not recommend this app to casual users or to someone who is just starting out.

With the help of this app, you can customize many different settings manually that you may not be able to do in most of the camera apps. These features include shutter speed, exposure, focus, and many more. In case you want to enhance your pictures, even more, Manual lets you do that as well. You can save the image in RAW format which gives you the best photo quality. This is especially useful in case you are someone who is eager to learn how to edit in Photoshop.

In addition to that, basic histograms, as well as photo maps, are also integrated into the viewfinder. Not only that, there is also a rule-of-thirds grid overlay that enables you to compose the photograph in the best possible way.

Alright, guys, we have come towards the end of the article. Time to wrap it up. I hope the article has provided you with the value that you have been searching for all this time. Now that you are equipped with this information, do make use of it to the best possible degree. In case you think I have missed some points or there is something you would like me to talk about next, do let me know. Until next time, use these apps and make the most out of your photographs. 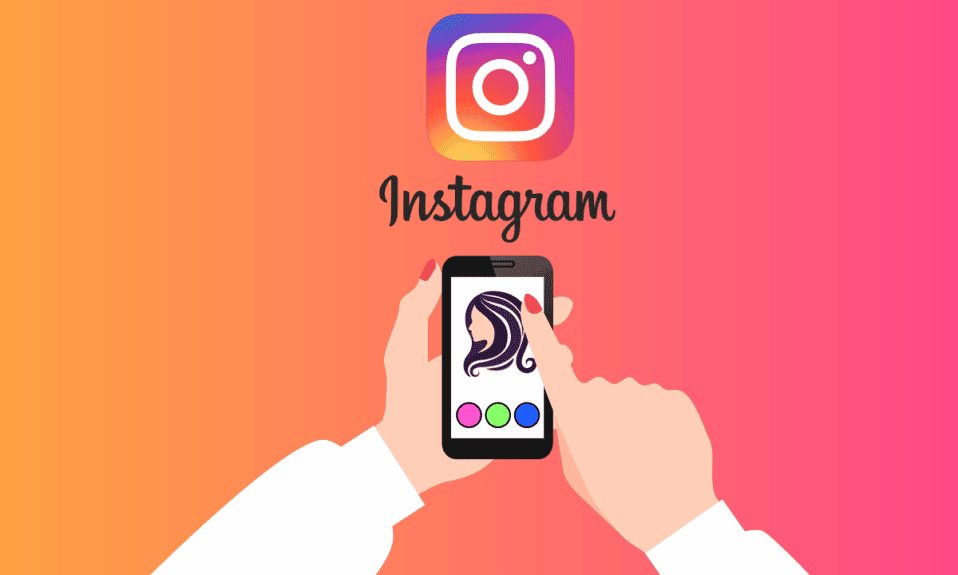 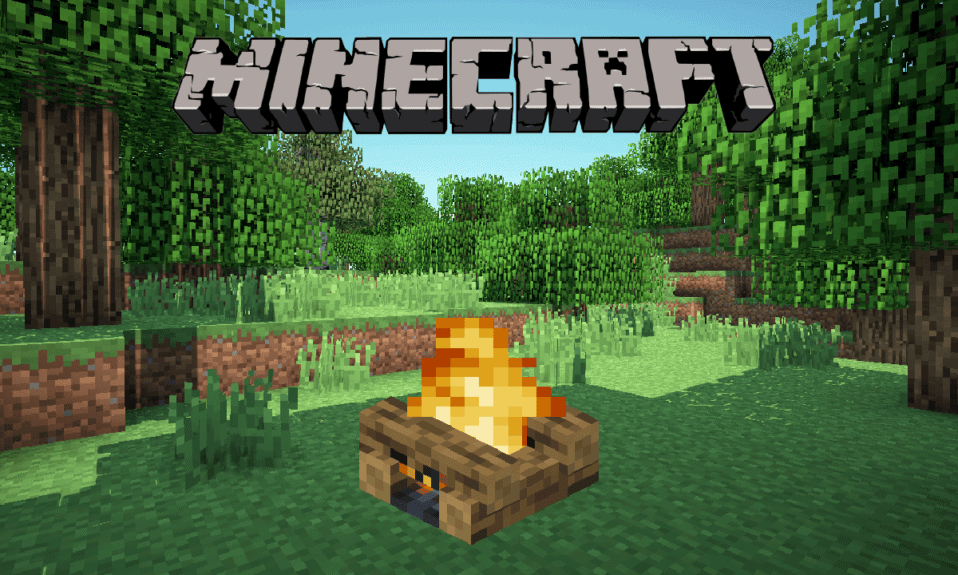 How to Put Out a Campfire in Minecraft 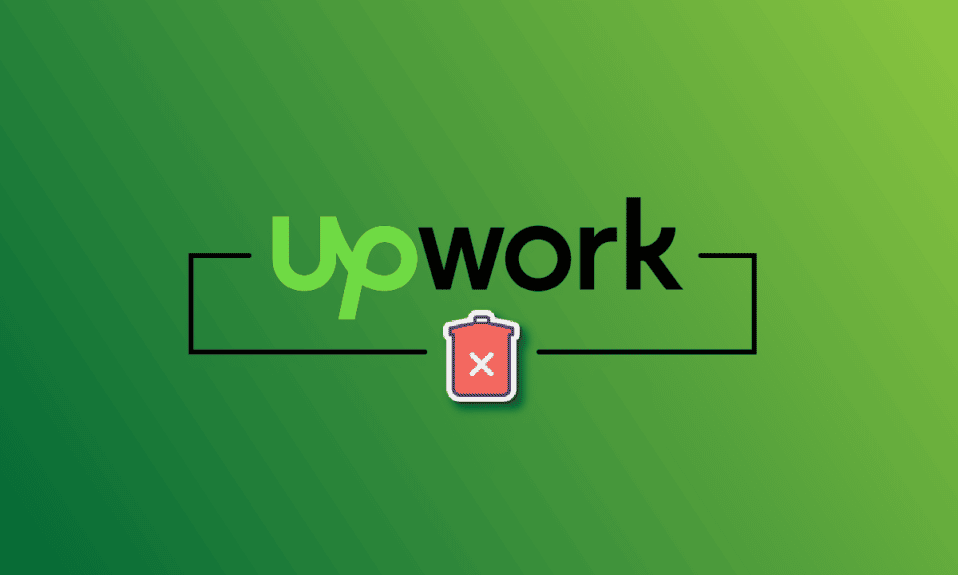 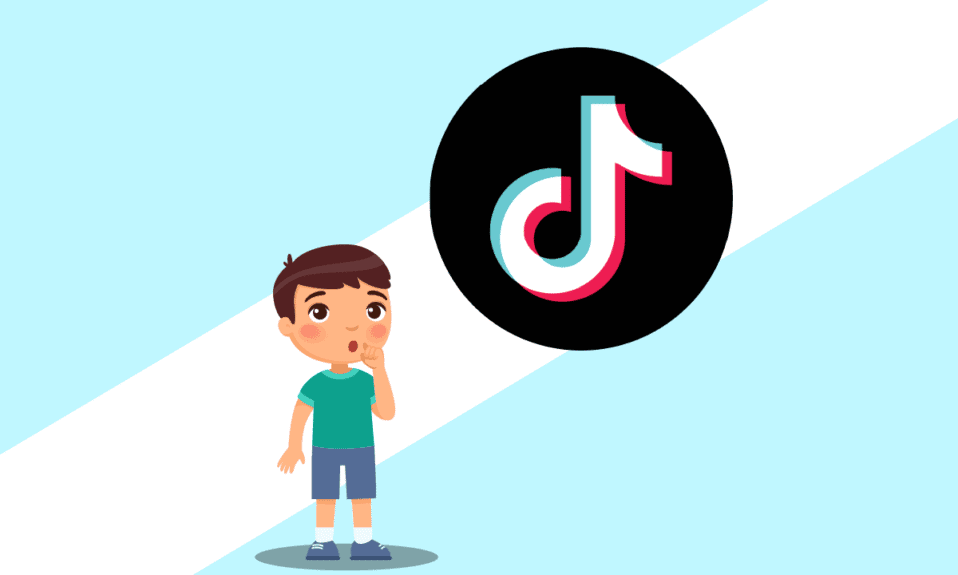