How to Take Screenshots on Android: Screenshot is a captured image of anything that is visible on the device screen at any particular instance. Taking screenshots is one of the most popular features of Android that we use because it just makes our lives so much easier, whether it’s a screenshot of a friend’s Facebook story or someone’s chat, a quote that you found on Google or a hilarious meme on Instagram. Generally, we are used to the basic ‘volume down + power key’ method, but do you know that there are more ways of capturing screenshots than just that? Let’s see what all ways can be used to take screenshots. 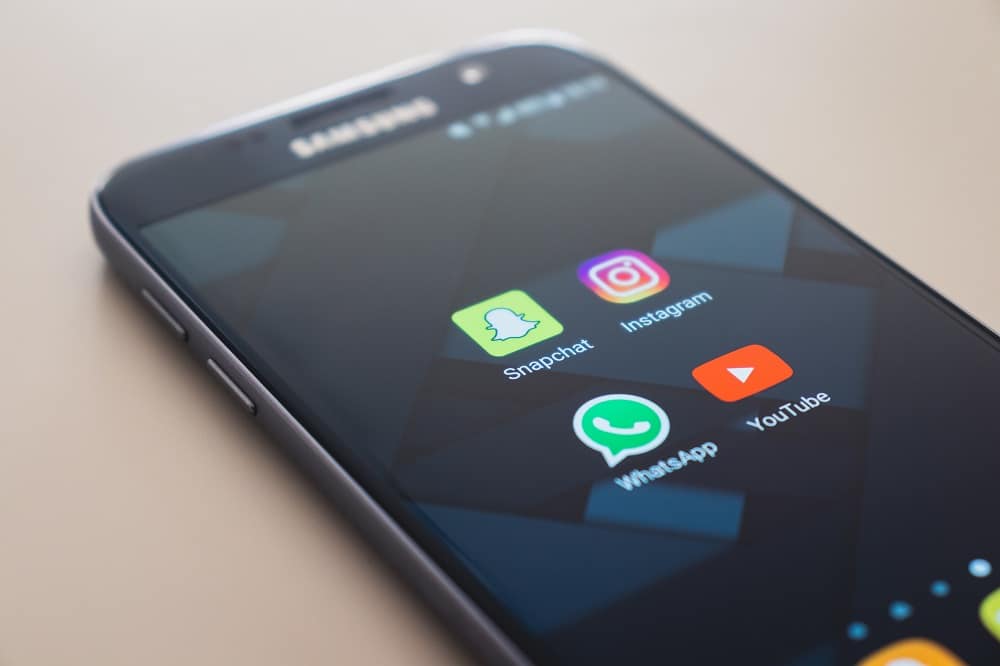 For an Android 4.0 (Ice Cream Sandwich) and later:

Method 1: Hold down the appropriate keys

As said above, taking a screenshot is just a pair of keys away. Open the required screen or page and hold down the volume down and power keys together. While it works for most of the devices, the keys to take screenshots may vary from device to device. Depending upon the device, there could be the following key combinations that let you capture a screenshot: 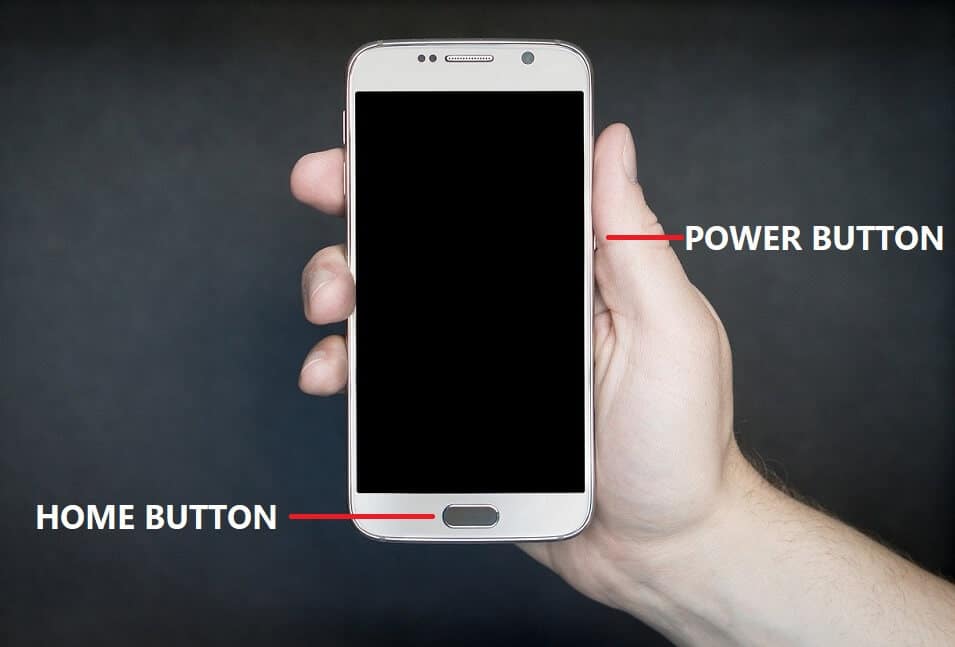 1.Press and hold Volume down and Power keys:

2.Press and hold the Power and Home button:

3.Hold down the power key and select ‘Take Screenshot’:

Method 2: Use the Notification Panel 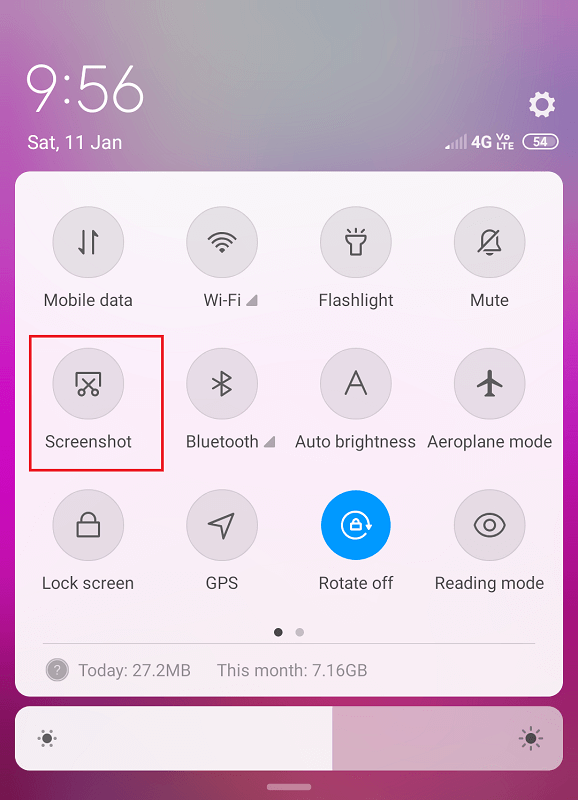 Some of the particular devices that also let you capture a screenshot by swiping down with three fingers on the required screen. Few of these devices are Xiaomi, OnePlus 5, 5T, 6, etc. 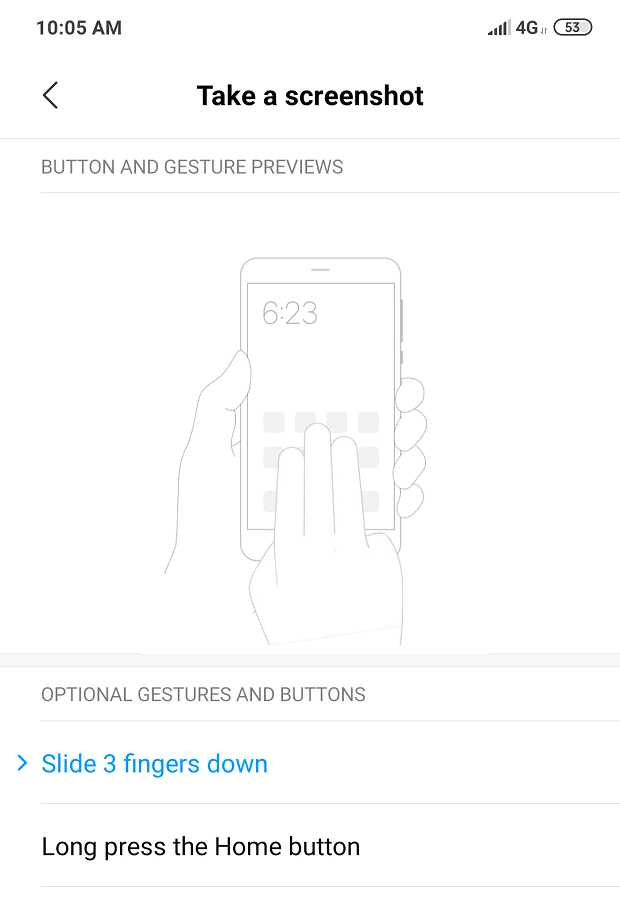 Most of the devices nowadays support google assistant, which can easily do the job for you. While you have your desired screen open, say “OK Google, take a screenshot”. Your screenshot will be taken. 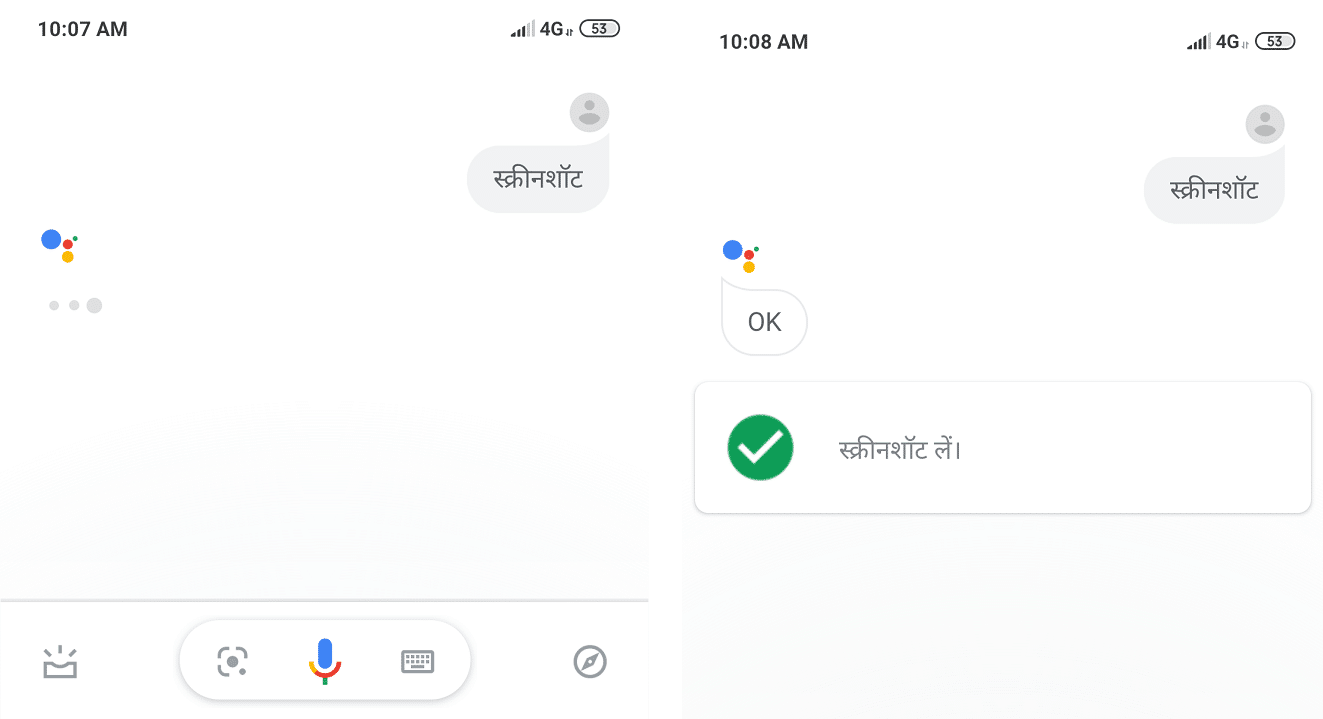 Earlier versions of Android OS did not have the built-in screenshot functionality. They did not allow taking screenshots to prevent malicious activities and privacy breaches. These security systems are put by the manufacturers. For taking screenshots on such devices, rooting is a solution.

Once rooted, you have various apps available on Play Store for such rooted devices like Capture Screenshot, Screenshot It, Screenshot by Icondice, etc.

Method 6: Download No Root App (Works for all Android devices)

Some apps on the Play Store do not require you to root your device in order to take screenshots. Also, not just for the users of the older version of Android, these apps are useful for even those users with the latest Android devices because of their very handy utilities and functionalities. Some of these apps are:

Screenshot Ultimate is a free app and will work for Android 2.1 and above. It does not require you to root your device and offers some really great features like editing, sharing, zipping and applying ‘Screenshot Adjustment’ to your screenshots. It has many cool trigger methods like shake, audio, proximity, etc. 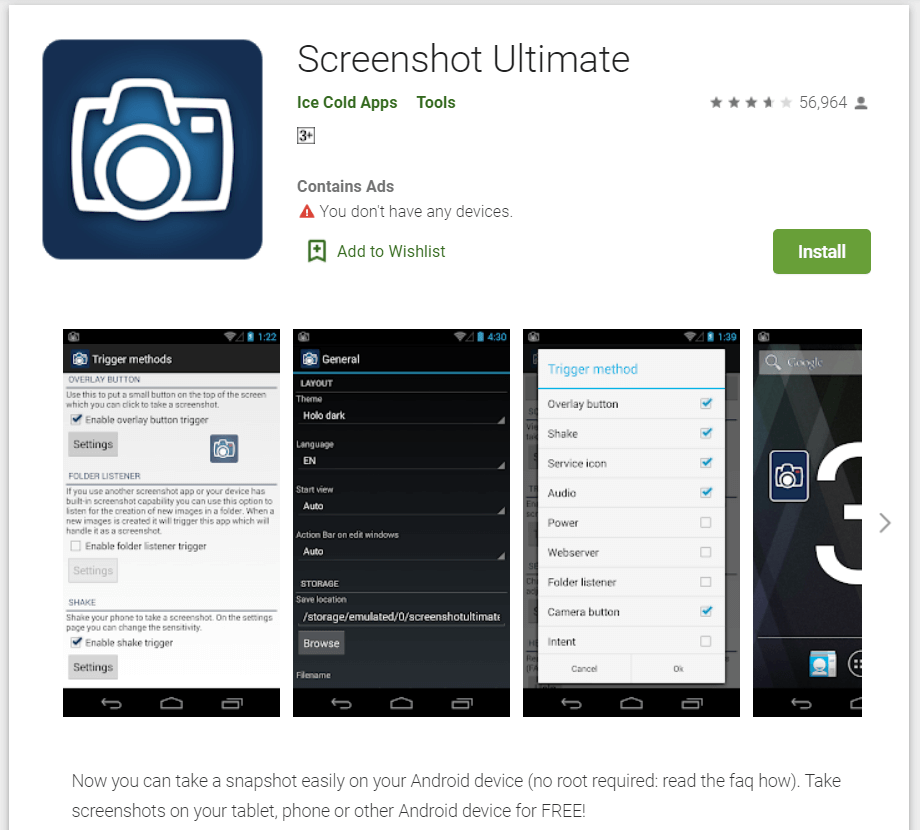 NO ROOT SCREENSHOT IT

This is a paid app and also does not root or temp-root your phone in any way. With this app, you will also have to download a desktop application. For the first time and for every subsequent device restart, you will have to connect your Android device to your computer to enable taking screenshots. Once enabled, you can disconnect your phone and take as many screenshots you want. It works for Android 1.5 and above. 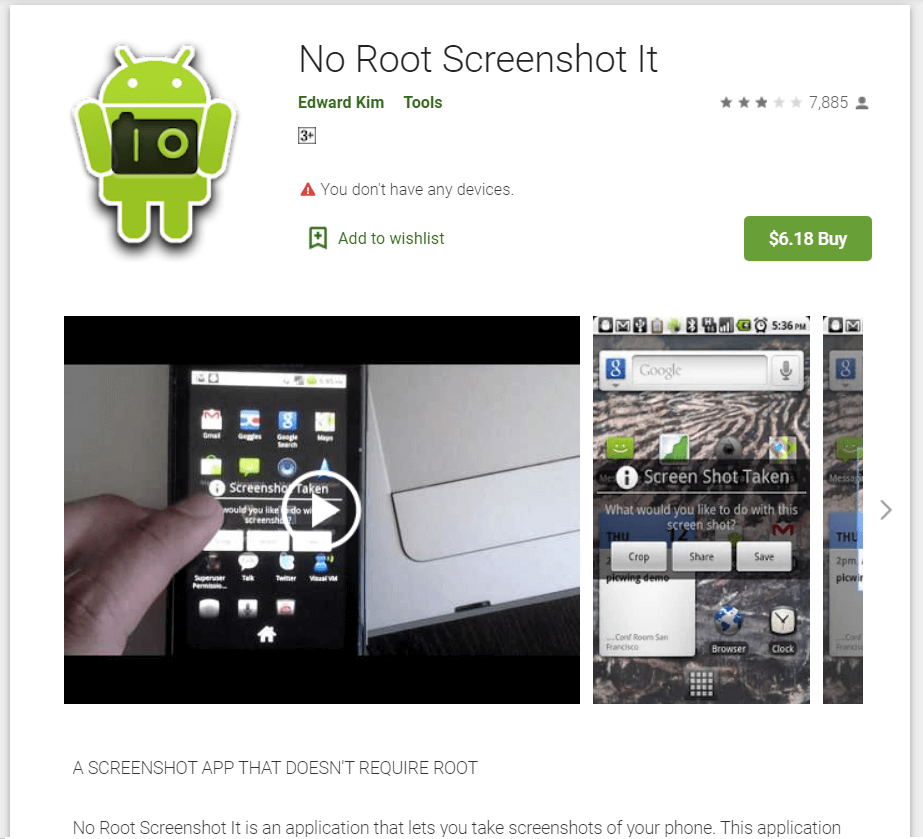 This is a free app available on Play Store that not just lets you take screenshots without rooting your phone but also do screen recordings and has features like a countdown timer, live streaming, draw on the screen, trim videos, etc. Note that this app will work only for Android 5 and above. 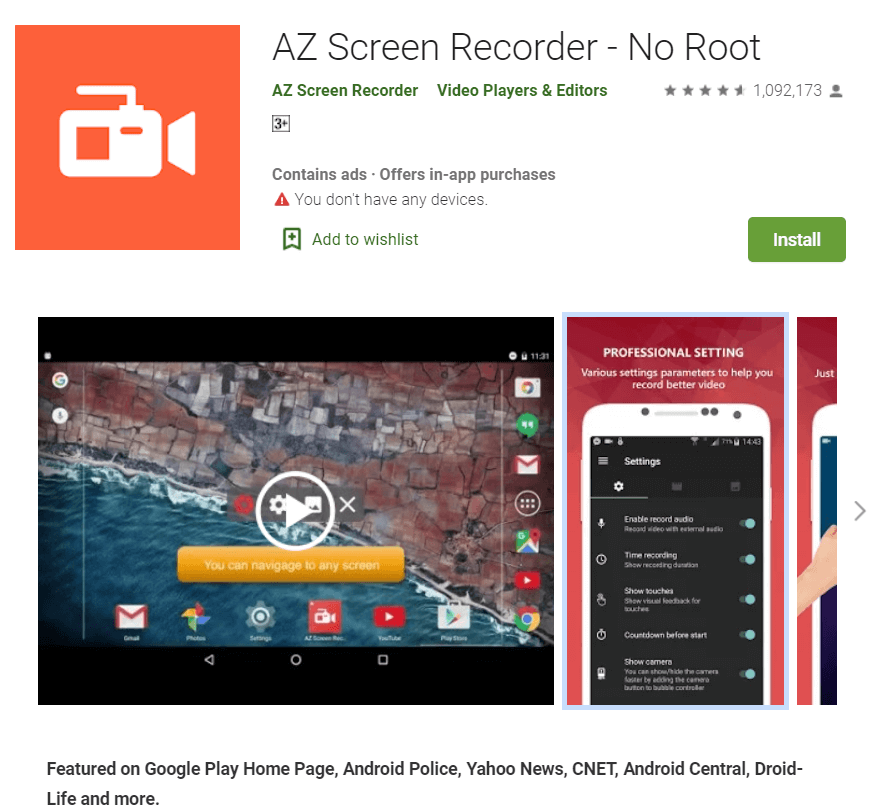 If you do not want to root your phone and are an Android enthusiast, there is yet another way to take screenshots. You can do so by using the Android SDK (Software Development Kit), which is a cumbersome task. For this method, you will need to connect your phone to your computer in USB debugging mode. If you are a Windows user you will need to download and install both JDK (Java Development Kit) and Android SDK. You will then need to launch DDMS within the Android SDK and select your Android device to be able to take screenshots on the device by using your computer.

So, for those of you using Android 4.0 or above, taking screenshots is clearly very easy with the built-in feature. But if you take screenshots frequently and need to edit them more often, using third-party apps would become very convenient. If you are using an earlier version of Android you will either have to root your Android or use SDK to take screenshots. Also, for an easier way out, there are a few third-party apps that do let you capture screenshots on your un-rooted device.

And that’s how you Take a Screenshot on any Android Phone, but if you’re still facing some difficulties then don’t worry, just let us know in the comment’s section and we will get back to you.