When you come across your photos folder, you may see some pictures with the file extension ‘AAE’. These files are essential, edits made to your images using the Photos app, on iOS devices. Simply put, with the use of.AAE files, one can refer to the collection of edits made on an iPhone. When you try to open these.AAE images prompt an error message stating that it is not a valid image file. This might confuse and annoy many users as they are unaware of how to open images with .AAE file extension. If you are also dealing with the same problem, this article will help you. So here we are to explain what is .AAE File Extension and how to open .AAE files. 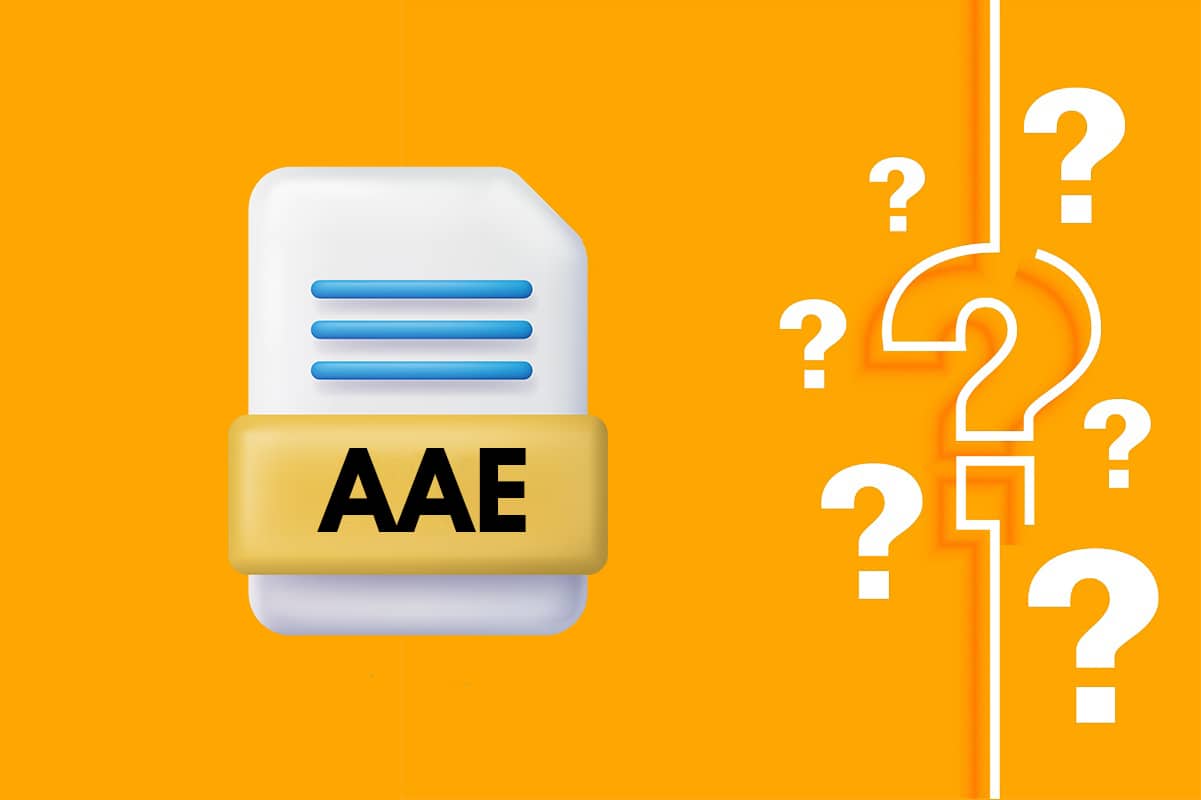 What is .AAE File Extension and how to open .AAE Files?

In iPhone, a picture is saved as IMG_12985.AAE, whereas in Windows system, there are no such file extensions; so the file name is displayed as IMG_12985, with a blank icon. Refer to the picture below. 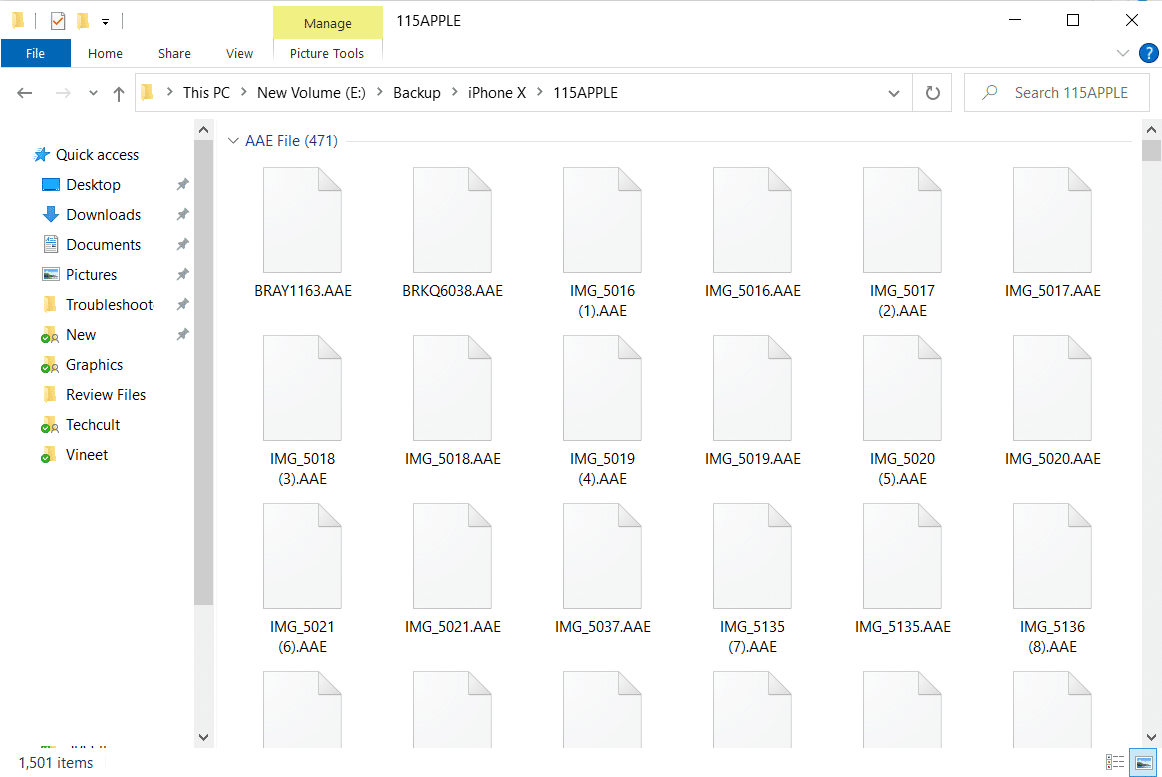 What is .AAE File Extension?

In previous versions of iOS, when you edit a photo, the original image was overwritten automatically.

Now, when you open an edited photo (.JPG file), the Photos app will refer to its associated .AAE file and will display the edited version on the screen.

All the .AAE files are saved in XML format, and you need to use a text editor, like Notepad to open it. 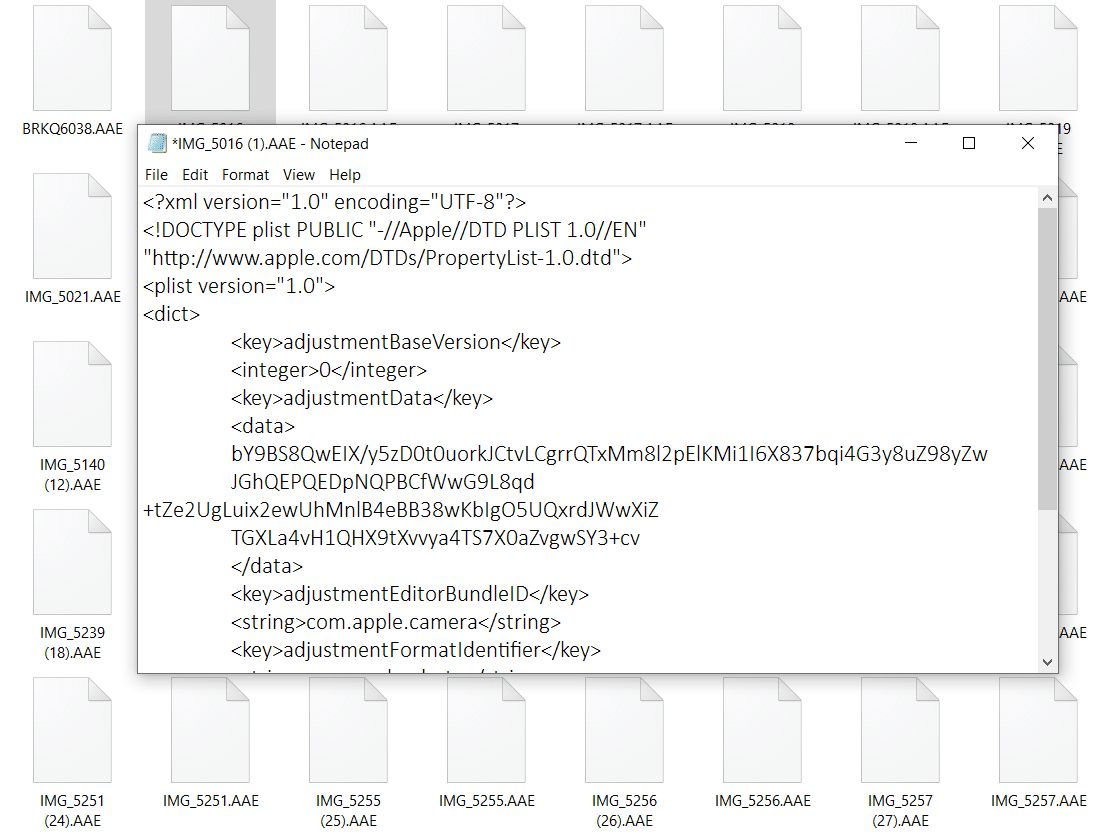 Also read: How to Show File Extensions in Windows 10

Is it Safe to Delete .AAE Files?

Many users are not aware of .AAE files and are often confused about whether to keep them or delete them. Whenever you transfer an edited image to Windows 10 or an older version of macOS, the.AAE files will also be transferred along with the original image.

1. As explained above, it is possible to delete.AAE files from the system without deleting the original version of it.

2. When you delete a .AAE file, the edits made to that picture also vanish automatically.

3. Always ensure that there a connection is retained between the original file and the edited file.

4. If the original file is renamed or moved to another location, the connection will be lost. Then, there is no use in keeping the edited file stored in the system.

5. Hence, whenever you modify the original name of a file, do the same modification to the edited file.

How to Open .AAE Files in Windows

Suppose you try to open a .AAE file in a text editor, such as Notepad or Apple TextEdit, only the XML data will be displayed.

Whenever you face trouble opening .AAE files in Windows, the below-mentioned points will help you to tackle this. You can view the file extensions on a Windows PC by performing the below steps:

1. Upload your files (images) to Dropbox.

2. Collect all uploaded photos with original sizes by logging into your Dropbox account.

3. Send a mail to yourself with all these photos as attachments (or) post the edited pictures on Instagram/Facebook.

Note: After sending a mail or posting the images on Facebook/Instagram, the original file size of photos will be diminished automatically.

5. Now, save the pictures, without making any alterations.

Tip: Ensure the program you have selected does not insert any watermarks/comments to the picture or crop/compress the original quality of the image.

We hope that this guide was helpful and you have got an idea about what is .AAE File Extension and how to open .AAE Files. Also, if you have any queries/comments regarding this article, feel free to drop them in the comments section.